Serving the Lord by serving His bride is a joy. Pastors, ministry staff, and their families count it a privilege to rejoice with those who rejoice and to weep with those who weep. But as much of a joy and privilege it is to serve in vocational ministry, it can also be tiresome.

Pastors and their families know how much work it takes to serve the church well. Work hours aren’t 9-5 like some other jobs, and ministry tasks can be quite tiresome for the pastor.

Most ministers today aren’t faced with the same physical dangers and hardships the apostle Paul endured, but they do share the daily pressure he experienced through his deep concern for the church (2 Corinthians 11:28). This inward burden along with the outward physical demands of ministry can exhaust even the healthiest and strongest of pastors.

Throughout the New Testament, Paul described his ministry to the saints as labor. To the Galatians who were close to being deceived, he feared his labor for them had been in vain. Paul willingly suffered labor pains for them until He saw Christ formed in them (Galatians 4:11, 19).

He also feared his labor for the Thessalonians would prove vain, but this burden was lifted when he learned of their resilient faith despite the persecution they faced. He reminded them to always appreciate those who diligently labored among them for their spiritual good and to regard them highly in love because of their work (1 Thessalonians 3:5-9, 5:12-13).

So we see from Scripture and life that ministry is both a joyful and an exhausting work. Tired pastors and ministers, be encouraged today by three of God’s good promises for you.

1. The Lord has compassion on you

Pastors, I’m sure as you read these words, the tendency is to scan right past them because you already know the Lord is a compassionate God. You teach and preach this. You counsel and encourage others daily with this aspect of God’s nature.

But for this moment, ask the Lord to help you internalize His compassion for you. Ask Him to allow you to believe and receive His tender love toward you.

The Lord has called you to some great things. You’re entrusted to lead and shepherd His people. That’s no small task.

But as you grow weary from this toil, take heart because your Father knows you’re just a man. He remembers your first parent Adam and his origin from dirt.

You can do mighty things through the Holy Spirit, but your Father sees the frailty of your humanity and doesn’t despise you for it. Rather, He gives you compassion as you serve Him in it.

What ministers do, both seen and unseen, is meaningful. Your work matters because the resurrection is real.

The work of pastors and ministers is carried out in faith. You plant the seed of the Word, not knowing how it will be received, but only that God will ultimately accomplish His purposes with it (1 Corinthians 3:6–7; Isaiah 55:10-11).

If the resurrection isn’t true, then why bother doing this work of faith? It won’t matter in the end. Paul himself asks similar questions in 1 Corinthians 15:30-32:

Why are we in danger every hour? I face death every day, as surely as I may boast about you, brothers and sisters, in Christ Jesus our Lord. If I fought wild beasts in Ephesus as a mere man, what good did that do me? If the dead are not raised, Let us eat and drink, for tomorrow we die.”

Why should Paul risk his life if it only counts here on earth? Why should tired pastors continue in the work of ministry with little fruit to show for it?

Because your work is accomplishing an eternal purpose for which you’ll be rewarded. This is proven by Christ’s resurrection! Hear Paul’s encouragement to you with fresh ears today from the Spirit:

Therefore, my dear brothers and sisters, be steadfast, immovable, always excelling in the Lord’s work, because you know that your labor in the Lord is not in vain.” –1 Corinthians 15:58

It’s not just modern pastors or ministry staff who feel tired and weary at times. Many Old Testament servants of God faced obstacles that caused them to feel low. They continued, however, to put their hope in the Lord as seen through these examples:

Pastor, remember who your God is. Though you’re tired from the work of ministry, look to Him and find the compassion you need, the eternal perspective that makes your weariness worth it, and the hope you need to be renewed both physically and spiritually.

He will be faithful to you, just as He’s been to the saints and servants who walked before you.

Courtney L. Moore (@court_lm) founded Women & Work: Stepping into Kingdom Productivity in May of 2018. A former IMB missionary and classical educator, Courtney writes content for several publications of LifeWay Christian Resources as well as for Pinelake Church in Jackson, Mississippi. She holds a B.A. in Religious Studies from the University of Mobile and an M.A. in Biblical Counseling from the Southern Baptist Theological Seminary. Her desire is to see women honor God and flourish as they step by faith into all He’s called them to be, especially through the medium of work and ultimately for the sake of the Kingdom. She and her husband, Brent, as pastor in Mississippi, joyfully parent their two boys and baby girl. Read more of Courtney’s work at courtneylmoore.com. 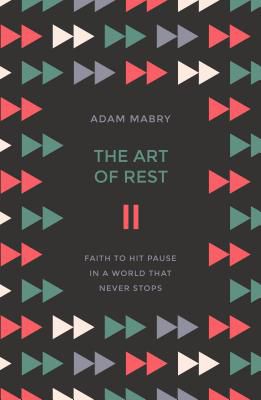 The Art of Rest: Faith to Hit Pause in a World That Never Stops