Embracing scientism—the view that the hard sciences provide the only genuine knowledge of reality—is like knocking over the first domino, leading to a cascade of other beliefs that will fall by the wayside.

This is true when it comes to how our culture defines knowledge, truth, duty, virtue, freedom, and tolerance.

Shift from Knowledge to Blind Faith

The first shift is in the realm of religion and ethics and is a shift from knowledge to blind faith.

Shortly after the terrorist attack on September 11, 2001, Oprah Winfrey focused an episode of her program on the turn to God since the attack, a turn she herself wished to foster.

For those already deadened to cultural shifts, the program was fairly uneventful, but for those with eyes to see, it was breathtaking.

Oprah urged people to seek God, “whatever he, she, it, or they mean to you.” We should not get hung up in the word we use for him, her, it, or them, she cautioned. The important thing is that we all seek our own truth with renewed vigor.

Now, what assumptions—most likely subconscious—must Oprah Winfrey and her editorial crew be making about religion and the audience’s understanding of it?

The assumption is that, in contrast to scientific assertions, religious claims are neither factual in nature nor subject to rational evaluation. Religion is not a domain of fact and knowledge, so there are no experts on that subject.

Thus, a talk show host’s feelings about her own truth regarding religious matters is no more “valid” than anyone else’s.

The second shift is in the realm of guidance for living one’s life, and it goes from truth to the immediate satisfaction of desire.

Scientism tells us that there is no truth related to the meaning and purpose of life; the difference between right and wrong or virtue and vice; life after death; and, of course, God himself. And even if there were truths in these areas, no one could have a clue as to what they were.

It follows that truth as a first-priority guide for living must be dethroned. After all, who can guide his life by an unknowable set of truths that probably aren’t really there anyway?

But people need something to guide their lives, and so the absolutization of instant gratification and the satisfaction of personal desire have replaced truth.

I leave it to the reader to list the indications that a culture has experienced this shift (hint: look at liberal, secular American culture and in particular their attitude toward sexual hedonism and its consequences).

Shift In How We Understand Ethics

The third shift is in ethics, and it goes from positive duty and virtue to do-no-harm minimalism.

Given scientism, moral knowledge is impossible. And the loss of moral knowledge has meant a shift from a view in which duty and virtue are central to the moral life, to a minimalist ethical perspective.

If duty and virtue are of central concern to the moral life, then there must be moral knowledge available to know what duties and virtues are correct and how one can become a righteous, virtuous person.

Remember, moral rules without knowledge degenerate into customs such as “don’t eat your peas with a knife,” and customs are too trivial to marshal the courage and effort needed to live by and internalize them.

In 1981, Daniel Callahan, then the director of the Hastings Center, wrote an article titled, “Minimalist Ethics,” arguing that contemporary American culture had come to emphasize

Callahan said these diverse moral positions constitute different aspects of a widely accepted moral axiom—that is, minimalist ethics— that can be expressed in a single proposition: One may morally act in any way one chooses so long as one does not do harm to others.

The fourth shift is related to the third, but is manifested in the area of freedom, moving from a classic model to a contemporary version.

Classically, freedom meant the power to do what one ought to do. Thus, one is free to play the piano if one has the skills, training, and knowledge necessary to play it.

Similarly, one is free in life if one has the power to live in the way one ought to live. Sexual freedom in this context means the power to live a chaste, holy life and to engage skillfully in sexual activity in the way in which we were designed by God—in marital union between husband and wife.

By undermining moral knowledge, scientism has provided the context for the contemporary view of freedom and, consequently, it has led to moral chaos.Classic freedom is liberating, but a necessary condition of such freedom is the availability of the relevant sort of knowledge.

Absent such knowledge, contemporary freedom has come to be understood as the right to do whatever one wants to do. Sexual freedom in this context means the right to satisfy one’s desires in any way one wishes, with the possible exception of not harming others (see the previous point).

So then, by undermining moral knowledge, scientism has provided the context for the contemporary view of freedom and, consequently, it has led to moral chaos.

For example, in my view, the contemporary view of freedom makes it difficult to justify resistance to a wide range of immoral practices, such as the practice of adults having sex with minors, even with children. If this is what adults want to do to satisfy their desires, who are we to judge?

One could respond that this is wrong because children cannot give consent to sex with an adult. But, absent moral knowledge, who can say that consent is a morally relevant notion?

Also, we don’t get consent to give children vaccinations, and we force them to go to school, because these things are good for children.

And, believe it or not, some contemporary groups are arguing that the idea that sex with adults harms children is an outdated, Victorian Christian idea and, in fact, sex with adults is like vaccinating a child or forcing his or her schooling: It is healing, liberating, and so on.

The point? By funding the shift from classic to contemporary freedom, scientism inevitably leads to moral bankruptcy.

Shift in How We Understand Tolerance

Finally, scientism warrants a shift in how we think about and practice tolerance, again moving from a classic model to a contemporary one.

According to the classical sense of the principle of tolerance, a person holds that his own moral views are true and are known by him to be such, and those of his opponent are false, but he still respects his opponent as a person and he respects his right to make a case for his views.

Thus, someone has a duty to tolerate a different moral view, not in the sense of thinking it is morally correct, but, quite the opposite, in the sense that a person will continue to value and respect one’s opponent, to treat him with dignity, to recognize his right to argue for and propagate his ideas, and so forth.

Strictly speaking, on the classic view, one tolerates persons, not their ideas. In this sense, even though someone disapproves of another’s moral beliefs and practices, he or she will not inappropriately interfere with them.

However, it is consistent with this view that a person would judge his opponent’s views to be wrong and would dedicate himself to doing everything morally appropriate to counteract those views, e.g., using argument and persuasion.

Classic tolerance presupposed the reality of moral knowledge. For that reason, it cannot survive in a culture of scientism. And it is scientism that has led to the contemporary view of tolerance.

The contemporary version of tolerance, popular in the general culture, goes beyond the classical version in claiming that one should not even judge that other people’s viewpoints are wrong.

Thus, the very act of disagreeing morally with someone else is intolerant. Unfortunately, if scientism is correct, there is no moral truth or knowledge and, thus, no real moral disagreements in the first place.

This contemporary version of tolerance is deeply flawed for at least two reasons. First, it cannot be consistently asserted or lived out, because those who affirm it imply that others who do not share their view of tolerance are wrong.

In other words, people who follow this new version of tolerance do not tolerate those whom they consider intolerant!

Second, it silences the moral protest of evils such as child molestation, racism, and so on. Why? Before one can morally protest something, he or she must judge it to be wrong and not worthy of being tolerated.

Such is the culture in which we now live, and we have scientism largely to thank for it.

J.P. MORELAND (@JPMoreland) is a philosopher, theologian, and author of numerous books, including Scientism and Secularism. He currently serves as a Distinguished Professor of Philosophy at Talbot School of Theology at Biola University.

Content taken from Scientism and Secularism: Learning to Respond to a Dangerous Ideology by J. P. Moreland, ©2018. Used by permission of Crossway, a publishing ministry of Good News Publishers, Wheaton, Il 60187, www.crossway.org. 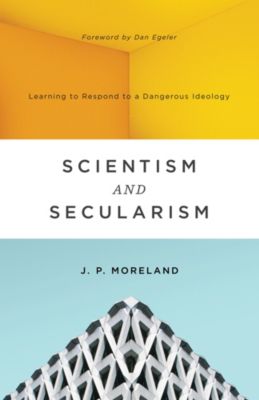 Scientism and Secularism: Learning to Respond to a Dangerous Ideology