What do you want to do in a hurry in your church?

In the 1980s, microwaves became accessible to the average American and quickly become part of most homes. Almost simultaneously, the phrase “microwave society” began to take root, describing a fast-paced culture obsessed with getting something now.

If that described the ’80s, what does that say about the hyper-connected, digital speed culture of today?

But God is not a God in a hurry. After creating the world and bringing humanity into existence, He took a day off and rested.

God promised He would make Abram a “great nation” (Genesis 12:1), but Abraham wouldn’t have Isaac for another 25 years. The Israelites wander in the wilderness for 40 years until God brought them into the promised land.

Way back at the fall of Adam and Eve, God promised Eve a descendant who would come and crush the serpent’s head. It was thousands of years later before a Baby was born in a manger who would grow to do just that.

Even now, all of creation groans, waiting for the return of Christ to set all things right.

Not only are God’s ways higher than ours, but His timetable is vastly different from our own.

We cannot rush His purposes, but here are five parts of church life we are frequently tempted to speed up.

Standing on this side of the cross, we can be anxious to see friends, neighbors, and family members embrace Christ and follow Him as Savior. But that’s not something we can make happen.

As the Spirit works and draws people to Jesus, sometimes they respond quickly, and others take more time. While we must commit to evangelizing and continuing to have spiritual conversations, we cannot make things go any faster.

Share the gospel frequently and develop relationships with those far from Christ but recognize the process can often be slow.

This is literally a lifelong process. Sanctification begins the moment we are saved and is not complete until the moment we see Christ face-to-face.

Remember this as you grow frustrated at the seemingly slow growth of others in your church.

That doesn’t mean we refuse to correct those who continue in sin or fail to encourage others, but it does mean we understand that none of us have arrived yet.

Paul told the Philippian church he had not reached the goal, but he was making every effort to take hold of it because he had been taken hold of by Christ (Philippians 3:12).

We must recognize in others and in ourselves that discipleship takes time. Until we see Jesus, we keep pressing on in the development.

When a pastor begins at a new church or a visitor first joins a congregation, the desire is often to form deep relationships with others there. That should be a goal, but it should not be an immediate expectation.

Very rarely do we form real relationships in a short amount of time. That level of trust and commitment almost always develops over months and years, not days and weeks.

Allow time for the “get to know you” phase. Trust that God has brought you to this church for a reason and that includes community with other believers.

Seek to form friendships. Open yourself to those around you. Seek to know them, serve them, and serve with them. But don’t expect to find your new best friend after being at a church one week.

There are two ways people try to speed up the leadership process. Some try to lead too far too fast and others try to become leaders before they are ready.

If you are already a leader of the church, you can get in a hurry to accomplish what you see as God’s will for the congregation. But what if the rest of the people aren’t ready?

Instead of rushing things through, over any and all objections, ask God to help you shepherd the people to the place where they are ready to make the move.

When they recognize the need and respond, they will be much more likely to be bought in and see everything through to completion.

If you’re looking to become a leader in your church. Give that time as well. Don’t build significant responsibilities on a foundation of character that has not been tested.

If you want to lead, first look for areas where you can serve without the limelight. Ask those who are already leaders if you can follow them around, observing them, serving them, and asking questions.

Because conversion, discipleship, relationships, and leadership all take time, it’s no wonder that change usually takes time in a church as well.

When we see new people come to Christ, grow in their faith, form committed relationships with others, and develop into new leaders for the church, change and institutional growth will happen.

In the meantime, however, progress and change can seem to be moving so slow. But it’s worth the wait.

You could probably microwave a pot roast and cook the meat, but the results taste much better with a slow cooker.

You can’t rush everything in church—and we are better off for it. 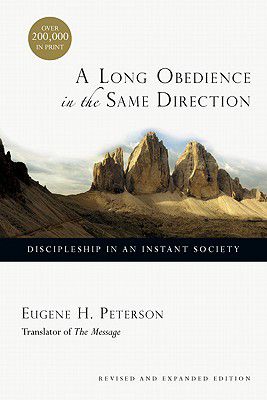 A Long Obedience in the Same Direction: Discipleship in an Instant Society