Memorial for those killed at Sutherland Springs | NAMB photo

One year after the November 5, 2017 massacre that resulted in 26 deaths and many injuries at Sutherland Springs (Texas) First Baptist Church, the mood of the congregation ranges from “somber at times to upbeat, even full of joy,” says Frank Pomeroy, pastor of 17 years.

“We acknowledge that we must move forward with a joyful spirit, and we do that by looking up, by praising the Lord,” he added.

Following days of special events – including some fun and celebratory, such as Wednesday’s Fall Festival—today’s one-year anniversary will be for the public. It will feature Texas Governor Greg Abbott; Jim Richards, Executive Director, Southern Baptists of Texas Convention; and groups playing Christian music.

Two services were held Sunday, one devoted to families of survivors. Pomeroy and his guest, Ted Elmore, spoke on the importance of memorials and remembering that loved ones no longer with us physically live in our memories until we are reunited. Pomeroy’s text came from Hebrews 11, recalling the saints. Elmore, representing SBTC, took his text from Joshua.

We acknowledge that we must move forward with a joyful spirit, and we do that by looking up, by praising the Lord. — Frank Pomeroy, pastor of Sutherland Springs FBCThe congregation has grown since the tragedy, from 100-110 to 180-200. Pomeroy says he is touched by outpourings of financial help and love from the town—even strangers far away.

Worship is held in a temporary building while the new facility is being constructed. The former building, now white-washed, has been retained as a memorial. The gut-wrenching damage is no longer visible. In place of bullet-ridden pews and other evidence of violence are white chairs featuring names of the victims.

Twenty-six worshippers died at the hand of the shooter, who ran into the small sanctuary during Sunday morning’s service wielding an assault rifle and a handgun, wearing tactical-type gear and a ballistic vest. At least 20 were wounded.

Pomeroy and his wife, Sherri, lost their 14-year-old daughter, Annabelle, in the rampage which claimed lives of people ranging in age from 18 months to 77 years and counting an unborn baby. Multiple members of one family died, including lead deacon, Bryan Holcombe, at the pulpit. The gunman did not spare even his own grandmother-in-law.

The 26-year-old was shot by a civilian as he ran from the church. Fleeing in his SUV, he crashed after a high-speed chase. He was found dead with multiple gunshot wounds, including a self-inflicted shot to the head.

Pastor Pomeroy, like his congregation, was not prepared for such a tragedy, but he is grateful for quick actions by law enforcement officials and many others. A Navy veteran, he had been a youth pastor, then a bi-vocational pastor, working as a motor-controls electrician on industrial equipment. His degree in biological anthropology is from Texas State University.

“Yes, we still experience sadness and heartache, but we are joyous, knowing we will see our loved ones again,” he said. Church members, family, and friends gathered on Sunday, Nov. 4, at First Baptist Sutherland Springs, Texas, for a special service in the afternoon commemorating the one-year anniversary of a shooting at the church that took the lives of 26 members of the congregation and left 20 injured. The church’s original worship building, pictured at left, now stands as a memorial to those who died. The congregation now meets in a temporary building while a permanent worship center is being constructed. North American Mission Board photo by Andrew Pearle.

Sutherland Springs focuses on the Light of the Lord, rather than darker sides of life. Tell about Wednesday’s event in place of Halloween. Share your story that involves collecting candy and demonstrates the joy your congregation is able to achieve only one year later.

People come to Fall Festival from as far as San Antonio for treats ranging from nachos to popcorn. One church tradition is to collect candy donations. This year a friendly challenge was issued pitting 30-year-old and younger members against the older folks to see who could gather the most candy.

One younger person brought 100 pounds of candy so his age group would win. When word got out, the other side did the same hoping to take the title. And so it went. All said and done, we had 600 pounds of candy! So, yes, we’re able to have that kind of fun.

We had a record turnout—400 attendees, 50 workers—an incredibly successful event with smiles, laughter, and costumes.

You said Sutherland Springs – even after losing so many members – struggles with problems of any other congregation. But how is the health of worshippers who experienced gunshot wounds? How can people pray and reach out with financial support?

Financially, we’re raising funds for a children’s play area and for stained glass over the baptismal. However, what we covet most are not material things but people’s prayers.

Tell about life in your family without Annabelle. How have you survived such a loss?

While I’m answering your questions, my wife is at the cemetery—sitting and broken. Like other families, we’re trying to heal is all I can say. Like all the survivors, we’re getting by one day at a time. Some are doing better than others.

A mass shooting occurred nine days ago at a Pittsburgh synagogue. What words of warning, wisdom or comfort do you have for other victims of tragedies?

I pray God will let them know many are praying. Sadly, they’re not alone. Sutherland Springs First Baptist is a faith community whose heart is broken also.

One warning, because this caught me by surprise: Be cautious of people who might call themselves Truthers (conspiracy theorists). I encourage their leadership to take these people seriously and to report them to authorities. Some are belligerent and willing to hurt survivors in the most hateful of ways.

What would you say to a deeply troubled person, like the man who entered your church that Sunday and whose deadly actions changed lives of so many people who love the Lord?

That answer would have to come from Him, through me, to the individual. I would say that, as long as there is breath in his body, there is the possibility to repent and to be forgiven by Christ. Consequences of his actions will remain, but God can wash away sin and use him in the prison system.

Carolyn Curtis is a journalist, speaker, and author, whose latest book is Women and C.S. Lewis: What his life and literature reveal for today’s culture (Lion Hudson, Oxford). 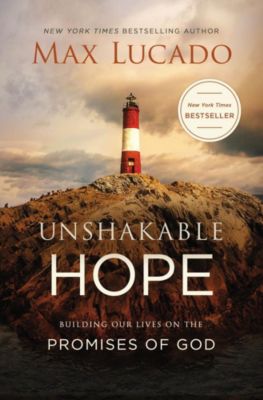 Unshakable Hope: Building Our Lives on the Promises of God