We’re inching closer to the end of the year, and it’s time to reflect on this year’s highs and lows. If you’re like me, you’ll potentially focus on your lows more than your highs. If that’s the case, I want to encourage you to look at the things the Lord is doing with you and not just your ministry.

There was a time when I was at an all-time low in my life and I hit rock bottom. I was questioning everything I was doing, and this happened around the holiday season.

It seemed I started thinking about how fast time had flown by and the life I was living. I can remember sitting on my old brown couch asking the Lord all the why, what, and how questions—you know, the kind you ask the Lord when you’re frustrated with life and want things to stop.

It was about this time, and during this season of my life, when I just wanted answers from the Lord. Well, thank the Lord; He’s faithful to hear His servant’s cries. Therefore, I want to share with you what I live by every day in my life. I call them my three pillars of life.

His Perception of Me

The first pillar the Lord showed me was His perception about me. His Word says in Psalm 139:14, “I will praise you because I have been remarkably and wondrously made. Your works are wondrous, and I know this very well.”

The Lord has said I’m fearfully and wonderfully made which means I’m not junk. Moreover, this moment in my life will pass by as long as I keep looking to Him who called me and not at others’ perceptions of me!

I grew up with a learning disability and speech impediment which was the main reason I questioned the Lord calling me. But on this night, He told me I’m fearfully and wonderfully made by Him. Therefore, my limitations only serve to show the Lord’s strength in my life.

His Perspective of Me

The next pillar the Lord showed me was His perspective of me as a part of God’s people. In Deuteronomy 32:10, the Lord says collectively about His people, “He found him in a desolate land, in a barren, howling wilderness; he surrounded him, cared for him, and protected him as the pupil of his eye.”

Wow! As a Gentile who’s been grafted into the kingdom of God, the Lord sees me and the rest of His people as the apple of His eye. Even in spite of my issues and hang-ups, I’m treasured by God. That means God has me so close, He can see me in His eye.

What a comforting thought to know the Lord sees His people this way. Be encouraged that the Lord is using every desert, wasteland, and howling place to prepare you for what he has in store for you.

His Promise for Me

That leads me to my final pillar which is in Genesis 12:2 when God says to Abram, “I will make you into a great nation, I will bless you, I will make your name great, and you will be a blessing.”

It’s with this verse the Lord showed me His promise for me. You see, according to Galatians 3:29, I’m Abraham’s seed—an heir to the promise of the Lord.

So, look back over this year and make necessary adjustments to your life and ministry. Only, don’t forget what the Lord says about you. You’re more than just your ministry; you’re Gods child. My friend, you’re God’s prized possession.

Remember, therefore, you’re fearfully and wonderfully made. As part of God’s people, you’re the apple of His eye. And you’re blessed be a blessing.

Keep your focus because the best is yet to come!

DR. A.B. VINES (@DrABVines) has been the pastor of New Seasons Church in San Diego for the past 13 years and was elected first vice president of the Southern Baptist Convention at the 2018 Annual Meeting. Vines currently serves as president of the California Southern Baptist Convention (CSBC) and is a trustee at the Ethics & Religious Liberty Commission. He is the husband to Karen, father of four, and “PaPa” to nine. 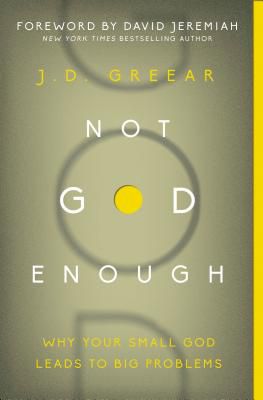 Not God Enough
Why Your Small God Leads to Big Problems