“Jesus reserved His harshest words for the religious elite.”

I’ve repeated that line hundreds of times in 25 years of preaching and teaching the Bible.

The religiously-affiliated of Jesus’ day and of our own are often unmoved by Jesus himself, preferring instead the rote exercises of religious duty over the heart-changing affection of a personal relationship with God that Jesus provides.

Not every religious traditionalist, however, is a hopeless cause. Although Isaiah, Jeremiah, Micah, and the rest of Israel’s prophetic chorale didn’t see widespread success, it’s impossible for me to believe their preaching had no effect on anyone.

Surely a few of the “frozen chosen” thawed out a bit. Surely there were some who didn’t walk the aisle or complete a connect card who nevertheless turned their heart to God.

We actually see evidence in the Gospels that many Jews and Gentiles alike expected a Messiah to come. John the Baptist is perhaps the best example of a pre-gospel Jew who was eager to see Jesus, but there were others like Andrew who told his brother he had found the Messiah.

Even the cohabitating, five-time divorced woman of Samaria knew a Messiah was on the way.

As much as the religious system of Judaism built walls around the gospel that kept people away from Jesus, those walls were not impenetrable. They had cracks in them, and through those cracks the light of the gospel broke through.

That’s how we meet the reluctant Nicodemus. Steeped in religious trappings, he saw something in Jesus that encouraged his rogue curiosity. Though the oral traditions of the Pharisees dominated and clouded his view, he was not completely blinded to the Word of God.

Nicodemus was, like most people in the world, a religious orphan—generally aware of God, respectful of God, but separated from Him. John’s Gospel narrates this life-changing episode in Nicodemus. Under the cover of night, this Pharisee, a “ruler of the Jews” approached Jesus, greeted him as “Rabbi,” and then acknowledged that Jesus was a teacher who had come from God. The signs Jesus had done convinced Nicodemus that there was something divine about Him.

But it’s interesting to note that Jesus didn’t just say “thank you” and move on. This was no casual conversation. It’s clear that Nicodemus was taking a great risk by talking to Jesus, and it’s also clear Jesus didn’t intend to allow Nicodemus to waste the moment.

After startling words about rebirth and an unexpected reference to Moses’ snake, Jesus then made the most famous statement ever recorded in Christian history,

“For God love the world in this way: He gave his one and only Son, so that everyone who believes in him will not perish but have eternal life.” –John 3:16 (CSB)

This renowned verse wasn’t first spoken to a far away tribe in an African jungle. It wasn’t saved for the pagan idolater of Athens. It was reserved for a ruling class Jewish man bound in a religion that claimed God as its own, but denied His power.

A man near to God, but still too far away to experience a new life.

Nicodemus wasn’t an outlier. He represents most of the people we will ever meet. He possessed an awareness of God, grappled with his own religious heritage, and continued searching for answers.

He was, like most people in the world, a religious orphan—generally aware of God, respectful of God, but separated from Him. And rather than move on to someone with less baggage, Jesus cared about him, honored his coy efforts, gave him room to believe, and showed us how to love people just like him.

Here are some things to remember as non-religious people enter our neighborhoods, workplaces, and church buildings:

Although Jesus spoke the truth, He never showed disrespect. Actually, He assumed Nicodemus knew the Bible well enough to know the history and teachings of Moses. That was their common ground and that’s where Jesus began as He engaged Nicodemus in a meaningful conversation.

When we appreciate where people are rather than criticizing where they aren’t, we show respect.

When we honor their questions rather than trapping them with their answers, we show respect.

When we recognize the risk they’re taking by being our friend rather than attack them in their area of vulnerability, we show respect.

Genuine respect in light of honest disagreement may be the most convincing evidence of Jesus’ presence in our lives.

Nicodemus’ religious commitment, although misguided, revealed a longing for God. And as he approached Jesus, he had legitimate questions about who He was. Not every religious orphan is this transparent or curious, but we should never assume unbelievers, regardless of their faith background, simply don’t care about God.

Their knowledge and experiences have shaped them, just like ours have shaped us. And while they’ve yet to place faith in Jesus, religious orphans often demonstrate a devotion that reveals a genuine desire to please God.

They put too much confidence in themselves and they trust in their own works to placate their idea of God, but it’s this devotion that becomes one of our best apologetics for gospel proclamation.

The vivid contrast between the religious person’s self-effort and the finished work of Christ provides a wonderful primer to experience God’s amazing grace.

We have no evidence that Nicodemus decided to follow Jesus during this late night conversation. For him to walk away from his religious community was no small thing. Jesus didn’t even ask him to do this.

So it seems Nicodemus—along with other religious leaders, including Joseph of Arimaethea—spent the next three years watching Jesus with caution, but also with hopeful curiosity. Religious orphans are slow to un-believe what they’ve already believed.

Abandoning their version of faith means abandoning their family and friends. It means coming to terms with their mistaken hopes. While we pray for a quick turn around, we shouldn’t be surprised, discouraged, or condescending when religious orphans take a little more time to carefully consider the claims of Christ.

Nicodemus’ faith journey began in the cold, Christ-less trenches of religious tradition, yet we have good reason to believe he became a devoted follower of Jesus. Simon the Zealot followed Jesus as Lord. Saul, a persecutor of Christians, after a life-changing encounter with Jesus on the road to Damascus, became the greatest Christian evangelist of the early church.

If we want to be faithful to the gospel, we will befriend and share deep conversations with the religious people around us who are disillusioned with their church tradition. If we want the Word to go forward in power, we will confront—without condemning—the religious zealot with the amazing grace through which God so loved the world.

If we want to love our neighbors, we will engage, care for, and save a seat at our table for religious orphans. They are far away from God, but not out of reach. 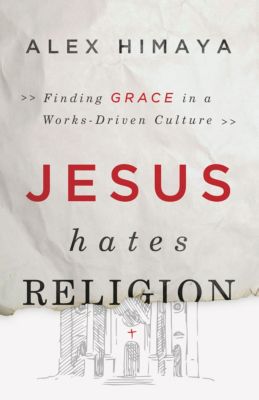 Previous Post: « 4 Reasons the Next Book You Read Should Be a Biography
Next Post: Video: Politics in the Church »