The question at hand is more than merely considering Joseph Smith and Brigham Young as offering views equally as divergent as Martin Luther and Augustine. Neither Luther nor Augustine argued for a physical deity who is connected, in some way, to another planet with, as some Latter-day Saints will conjecture, its own deity.

Similarly, neither Luther nor Augustine argued for a time in the past during which Jesus did not exist and then came into existence through the creative power of Heavenly Father and Heavenly Mother as the first spirit child of that relationship.

Augustine and Luther, and other Christian leaders in the early and later church, in fact, bluntly branded beliefs like this heretical and unbiblical. There is more to this than just degrees of difference.

In all of this, the First Vision of Joseph Smith must be brought in as well. During his initial vision in 1820, Smith purported to have seen Heavenly Father and Jesus Christ and received a message from them.

He was told not to join any existing churches, recounting it in Joseph Smith History 1:1–20, because they “were all wrong; and [Jesus Christ] said that all their creeds were an abomination in his sight; that those professors were all corrupt; that: ‘they draw near to me with their lips, but their hearts are far from me, they teach for doctrines the commandments of men, having a form of godliness, but they deny the power thereof.’”

The content of this vision is plain: existing churches at the time of Joseph Smith, and their leaders, because of their beliefs, were an abomination and the leaders were corrupt.

He continued, “The pressing problem was idolatry. . . . The problem was that man had fashioned unto himself a god, an unknown god, the unreachable and the unknowable Essence, the Wholly Other. Whether Catholic or Protestant, Jew or Muslim, the religious leaders of the nineteenth century, with their congregants—even the most sincere among them, and surely there were many—had lost their way.”

Indeed, the very idea of idolatry, as Robert L. Millet, Emeritus Dean of Religious Education at Brigham Young University mentions, is foundational to the existence of Mormonism. According to Latter-day Saint logic, had the Great Apostasy not taken place, there would be no need for any restoration; hence, there would have been no need for Joseph Smith.

It was this supposed Great Apostasy, bringing with it the loss of priesthood authority and the prophetic voice, that necessitated a restoration of first-century Christianity and, eventually, that Joseph Smith be the agent of the restoration during the early nineteenth century.

It should not be shocking, then, for a Latter-day Saint to hear a Christian describe LDS beliefs as corrupt or an abomination, to use words from the First Vision. It was in the spring of 1820 that this battle began between Christianity and Mormonism, and it was Joseph Smith who threw the first stone.

Yet today, when Christians, hopefully lovingly, share their faith with Latter-day Saints, they are often called anti-Mormon, bigots, or outright hate-filled. Why can Latter-day Saints use such language concerning historic, orthodox Christianity and not be called bigoted or hateful or anti-Christian when the same type of language cannot be used by Christians concerning Latter-day Saint beliefs without being denounced with the same modifiers?

Latter-day Saints would likely answer this question simply: their worship of and central focus on Jesus Christ makes them Christians. Indeed, they would probably go as far as to say the restoration to Joseph Smith in 1820 makes Latter-day Saints the true orthodox, historic Christian church.

Here is where we find ourselves using the same terms but defining those terms with different dictionaries. When an orthodox, historic Christian, or what is sometimes called a traditional Christian, makes the claim that a group is or is not Christian, the claim is made for theological reasons. The claims are not made in hateful, arrogant, or unloving ways, or if they are, they should not be.

1 Peter 3:15–16 enjoins Christians to be ready to offer Christ to all who ask, yet with gentleness and respect. Though Latter-day Saints call themselves Christians because they worship, adore, and are focused on their conception of Christ, historically orthodox Christians simply do not accept Latter-day Saint Christology as Christian.

These differences are not raised out of hate or anger, but out of concern for the souls of men and women. Evangelicals are usually the ones making these claims in a clarion fashion, and, to be fair, they are difficult claims to make because human emotion is involved and the hurt that can come from such claims cuts very deeply for those impacted by them.

However, the claims coming from Latter-day Saints are equally hurtful to anyone involved in a Christian church: we are said to be unorthodox, ignorant, and corrupt. Orthodox, historic Christians stand firmly with Hinckley’s statement, “We acknowledge without hesitation that there are differences between us.” We also stand firm with the thought, “We must not become disagreeable as we talk of doctrinal differences. There is no place for acrimony.”

In the end, we also agree with Hinckley’s call to stand fast in one’s beliefs. He said, “But in all of this there is no doctrinal compromise. There need not be and must not be on our part.” Therefore, when Christians say Latter-day Saints are not Christians, it is not out of anger, hatred, or bigotry; it is out of a desire not to compromise our deeply held doctrinal beliefs.

Our conclusion that Mormonism is not “Christian” in this narrower, theological sense does not imply any animosity or hostility toward Latter-day Saints. Devout Mormons tend to be good citizens, to espouse high, conservative moral values, and to make common cause with conservative Christians on such important social issues as abortion.

Nor do evangelicals single out Mormonism on this issue, since we reach similar conclusions about a variety of “Christian” religious groups whose teachings differ radically from biblical, historic Christian orthodoxy.

Our intent is to draw attention to the serious differences between Mormonism and biblical Christianity in order that believers may be prepared to share the truth with their LDS friends and loved ones.

With this as a foundation, Christians continue to do the work we believe Jesus Christ set out for us in the New Testament, specifically, to continue to spread the message of the gospel to the ends of the earth and to all peoples, regardless of any religious affiliation those peoples may or may not have.

Therefore, in the end, Christians are forced to say one thing: the Church of Jesus Christ of Latter-day Saints is not Christian in that it has its own distinctive and divergent beliefs, separate from historic, orthodox Christianity, many of which have been bluntly declared heretical and unbiblical for thousands of years.

TRAVIS S. KERNS, Ph.D., (@traviskerns) is a missionary with Send Salt Lake City. This article is excerpted and abridged with permission from The Saints of Zion: An Introduction to Mormon Theology by Travis S. Kerns. Copyright 2018, B&H Publishing Group. 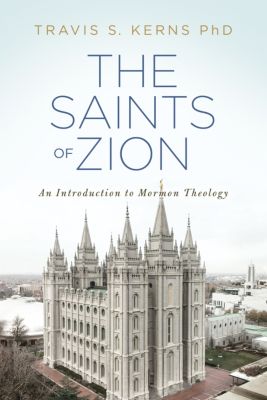 The Saints of Zion
An Introduction to Mormon Theology