Why Songs of Lament Are Important to Cultivating Spiritual Depth

We all are familiar with this everyday occurrence. In fact, odds are that the majority of our interactions throughout a normal day fall into this kind of category—into courtesy, niceties, and the like.

There is nothing wrong with this kind of conversation, especially when you are picking up food at a drive-through window or are dropping off a deposit at the bank.

But when the question is asked within real relationships, the truth is, we are not always “great.” Not in the slightest. Life is not simply a joyride through pleasant scenery.

Some moments in life are extremely dark. Dangerous. Painful. Full of unknowns and empty of any visible hope. In these moments, when we are asked this same question by someone other than a stranger, our response should go well beyond the shallow, superficial plane of nicety and into the very real plane of reality.

“My heart is broken.”

When the courage is present for these words to be honestly expressed, a different kind of conversation ensues … one that you probably won’t have in passing with a stranger at the grocery store. These words can’t be quickly passed by or easily resolved.

They require someone who deeply cares for the person whose heart is shattered to pull up a chair and sit with them in their anguish. To take time to listen. These moments move far past shallowness, bringing conversations and relationships into places of depth that often surpass anything experienced in either before.

Life is not always about rejoicing … it is often about lamenting as well.

And yet, when we come together to sing songs about the greatness of our God and His role in our everyday lives, we rarely sing songs of lament. We lift up lyrics and melodies that soar to the steepest heights of joy and heavenly elation … and unfortunately, our lyrics often soar so high that someone who is drowning on the ocean floor of their personal despair can’t reach them.

Our songs can even render them disjointed—if not wounded—in an experience that should instead instill in them a sense of safety, honesty, and ultimately, the hope of grace to endure the depths, not just proclaim the heights.

The ancients understood better than we do that singing to God and with His people need not be so lopsided on the sunny side. Scripture is replete with both the light that shines in real life, as well as the shadows that are inevitably cast between the rays. In fact, a third of the Psalms are actually songs of lament.

Unfortunately, our lyrics often soar so high that someone who is drowning on the ocean floor of their personal despair can’t reach them.The modern reader must be careful to remember that these were not just poems to be read aloud—they were actual songs to be sung aloud, accompanied by instrumentation. This means that when God’s people came together to sing, they sang lyrics like, “How long, Lord? Will you forget me forever?” (Psalm 13:1) and “[God has] taken from me friend and neighbor—darkness is my closest friend” (Ps. 88:18).

It is not the practice of most modern believers to naturally break into song with these kinds of lyrics put to melody. But one can’t deny that lyrics such as these are incredibly honest, embracing the realities of life to the point of mustering the courage to actually sing about them as one trudges through them.

Regardless of how we might knee-jerkingly react to these kinds of songs today, the fact that laments are meant to be a legitimate part of our Christian faith cannot be disputed. And so when we leave out more than a third of the Psalms, we inadvertently leave out more than a third of our real lives, which are filled with more than just moments to rejoice, but also moments of difficulty, heaviness, and darkness.

There was a time in our not-so-distant history when people seemed to gravitate to the Church when they were struggling with the cold realities of life in this fallen world—with the loss of a family member, difficulties with health, economic scarcity, depression, and the like.

In the message of grace offered to real people who actually needed it in their real lives—real lives that could be fully expressed to God and His people—they encountered more than a safe, sterile expression of a completely positive life in faith.

They found in God’s people an honest realism about life as it often is in the present, which reminded them afresh that they weren’t alone in those moments, but also accentuated to them the blessed hope of the life to come in the future.

Could it be that many of our churches today unknowingly contribute to disinterest (at best) and complete disengagement (at worst) among those who are suffering?

Does the predominantly uplifting demeanor of our songs somehow present something more akin to a veneer of happiness than a deeply anchored joy that must sometimes be desperately clung to, even in the midst of pain?

Are the fountains of which we sing deep enough to meet the thirst that the hardships of life produce in us?

The reality is that most of our modern churches do not intentionally and regularly sing songs of lament. There are two main reasons for this.

In terms of singing, though it may sound simplistic, people like to sing songs that they like. In other words, we do not generally default to expressing a deep level of honesty and struggle in our “church” songs, even when we should because such feelings are very much dominating our lives.

Instead of seeing these emotions as a realistic part of our spiritual walks, the expression thereof which is just as equally welcomed by God as any other emotion, we somehow seem to think it less-than-sacred to be this honest with God and His people about what we are truly feeling.

Does the predominantly uplifting demeanor of our songs somehow present something more akin to a veneer of happiness than a deeply anchored joy?Secondly, very few modern songwriters are writing songs of lament. This may be at least partially due to influence of the Christian music industry. Much of this industry is slanted towards writing and promoting songs that make the listener feel better about life, usually by focusing on the positives of life.

Again, this is not necessarily a bad thing unto itself, but is merely a commercial reflection of the modern church’s approach that culturally utilizes spiritual songs—and sometimes their entire worship services, for that matter—for the chief purpose to somehow make people feel good.

And while feeling encouraged about the lives we lead is certainly an important element of the Christian life, it is difficult to accomplish this encouragement without first meeting people where they actually are—in discouragement.

So from a songwriting perspective, there is a lack of significant margin for these kinds of songs in our churches and in the Christian industry, though some writers are definitely trying to carve out more of these sacred spaces.

The bottom line is that songs of lament are simply more difficult to “get into” because most of our songs in the modern age are written on a positive, sometimes even superficial level. A lament, on the other hand, takes us down a journey that cannot remain in the shallows because it is delves deeper into those parts of life that we wish we never had to face … yet everyone single one of us do.

When we sing, our hearts interact with the One to whom we are singing, as well as those around us who are listening to our song and singing along with us. Singing is not merely a performance; it is an intimate form of interaction.

Singing was created by God to be a divine discourse. It is an honest form of communication made holy by the expression of the very things we often consider to be unholy—that is, our doubt, anger, despair, or any other difficulty.

We often fail to realize that Christ came and walked among real people, taking on a real body, so that He could really experience and feel the weight of our difficulties, thus becoming both divinely and humanly sympathetic to them.

Christ does not desire that we feign some facade of holiness by avoiding expressions of lamentation; rather, the incarnation itself reminds us that He came and lived in a human body for the express purpose of experiencing the very life that causes us to lament so that we can and will trust Him enough to express these lamentations to Him and to one another.

This level of honesty is not just an optional feature that can be added to our growth into deeper relationships with Christ; is it an absolute condition of experiencing this depth.

So since we desire such a deeper relationship, let us learn to sing songs of lament to the Lord, revealing our truest selves to the One who has revealed His truest self to us and longs that we rest in being fully known by Him.

A good place to begin is by spending time reading the Psalms of lament, as well as praying them. As we open up our hearts and minds to these new, albeit sometimes uncomfortable areas of spiritual intimacy, we will have the courage to not run from them, but rather become more fully and honestly present in them with the Lord and with one another.

KEITH GETTY (@GettyMusic) and his wife, Kristyn, are modern hymn writers who have created a catalogue of songs including “In Christ Alone” (written with Stuart Townend), teaching Christian doctrine and crossing the genres of traditional, classical, folk, and contemporary composition. Keith and Kristyn are the authors of Sing! How Worship Transforms Your Life, Family, and Church. The couple lives between Northern Ireland and Nashville with their four daughters. 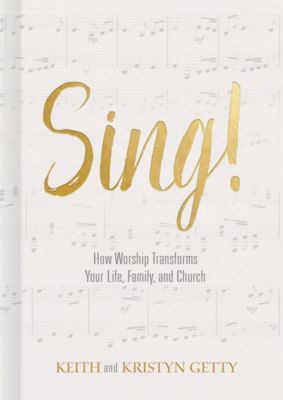 Sing! How Worship Transforms Your Life, Family, and Church