By Jamie Aten and Ward Davis

Faith has proven central to the way many disaster survivors make sense of and cope with catastrophe, but research shows not every survivor employs it the same way.

An emerging body of research would suggest the latter survivor will likely struggle more both spiritually and emotionally.

Disaster researchers have begun to study how faith impacts a survivor’s post-disaster recovery, including why religion might help one survivor but hinder another.

Much of this research has focused on the concept of religious coping, which we describe below and examine by highlighting lessons learned from Hurricane Katrina—which churches can apply as many mobilize to care for survivors of hurricanes Florence and Michael, and other catastrophes.

On its surface, religious coping might look like a reduction or devaluing of how people engage faith (e.g., religion as a “crutch”). But religious coping is commonly defined as much more: “a proactive process of searching for significance in times of stress.”

It involves people’s beliefs, experiences, emotions, relationships, and practices that are distinctly sacred in nature.

Beliefs and coping behaviors can be both constructive and destructive in times of stress or hardship—including disasters.

Bowling Green State University professor emeritus Kenneth Pargament and colleagues define positive religious coping as “a secure relationship with a transcendent force, a sense of spiritual connectedness with others, and a benevolent world view,” and negative religious coping as “underlying spiritual tensions and struggles within oneself, with others, and with the divine.”

Negative religious coping increases the odds of PTSD symptoms. In a study of 76 adult Katrina survivors (assessed at 3-6 and 9-12 months post-disaster), researchers explored predictors of four possible trajectories of PTSD and depressive symptoms.

In other words, negative religious coping may place disaster survivors at risk for PTSD.

In other words, people who reported higher positive religious coping were less negatively affected emotionally by their loss of material resources.

Sustained positive religious coping is associated with perceived growth. Researchers conducted a study (assessed at a few months pre-disaster, then again at one year and four years post-disaster) with 386 low-income mothers who survived Hurricane Katrina.

In contrast, survivors who experience religious and spiritual struggles following the disaster were likely to experience concurrent general psychological distress.

How the Church Can Respond

Taken as a whole, this research suggests that how people engage religion is a more telling predictor of resilience than simply how religious a person is.

Churches can use this research to help survivors move toward recovery by encouraging positive religious coping. This includes helping them find security in their relationship with God, experience spiritual connectedness with others, and embracing a benevolent God. This kind of faith has the power to move survivors toward lasting recovery as they make sense of and cope with the trauma of disaster.

This research also shows a direct link between survivors’ physical, spiritual, and emotional needs. Taking steps to meet practical needs like providing shelter, food, water, and medical attention can have a significant positive impact on survivors’ faith and overall well-being, and vice versa.

What survivors need most from the church when disasters strike is to have us compassionately enter into their pain and walk alongside them as they navigate the long road to recovery.

JAMIE ATEN (@drjamieaten) is the founder and executive director of the Humanitarian Disaster Institute and Blanchard Chair of Humanitarian & Disaster Leadership at Wheaton College (Wheaton, IL) and author of the Disaster Ministry Handbook. In 2016, he received the FEMA Community Preparedness Champion award at the White House. Read more at jamieaten.com.

WARD DAVIS is an Associate Professor of Psychology, the Founder and Director of the Psychology and Spirituality Research Lab, and a Faculty Fellow in the Wheaton College Humanitarian Disaster Institute (HDI). 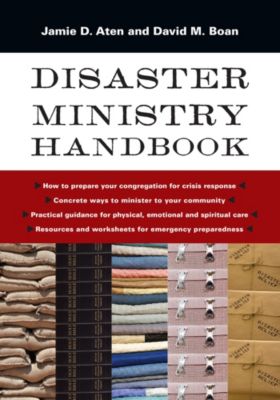 Previous Post: « Half of Pastors Approve of Trump’s Job Performance
Next Post: 3 Reasons to Create Space to Rest »