Pastors and church leaders have long lamented decreasing attendance numbers in many congregations across America.

But the number one reason for a decline in church attendance isn’t a mystery; it’s actually pretty straightforward, according to Thom Rainer, president and CEO of LifeWay Christian Resources.

“It’s not people dropping out of church,” Rainer said on a recent episode of the Rainer on Leadership Podcast. “It’s not people necessarily getting mad, though there might be a little bit of that. It’s not necessarily that people are saying that they’re less committed to Christ. It’s people attending less frequently.”

On the podcast, Rainer and host Jonathan Howe, director of strategic initiatives for LifeWay, discussed this common frustration, and they identified five types of people who likely attend your church less frequently.

How you engage these five types of people, Rainer and Howe said, can make all the difference.

This is the type of church member who comes to church every week, but gradually, their frequency of attendance starts to decrease, Rainer said. Maybe they start coming only twice a month. Then, they’re in church only once a month.

This may happen because of poorly rooted faith. Rainer told the story of a woman who started attending his church fervently at first, but then her attendance gradually slowed until it stopped altogether.

A church member may also fade away because of family crisis, such as divorce, Howe and Rainer said.

Type 2: The “Church is Just Another Activity” Church Member

Rainer described this church member as someone who treats church as if it’s just another optional activity on an already-packed social calendar.

“They will stay away from church for many reasons, where they would never stay away from a school or sports activity or a birthday party or something like that,” Rainer said. “But they see it as fine to take a break from church.”

“It affects not just the attendance numbers, but the overall body, and the ministry of the church,” Howe said.

Rainer agreed, saying it affects the example of church leaders the rest of the congregation is looking up to.

Rainer said this is most common among millennials and members of Generation X. Howe added that it’s also common in people with a higher socioeconomic status— people with disposable incomes and more opportunities for weekend trips and activities.

One way to fight against this tendency is to encourage people to go to church wherever they may be on a Sunday morning, Rainer said. He said he was inspired to do this after vacationing with a family who made church attendance a priority—even when they were out of town for the weekend.

“They said, ‘wherever we are, we can worship,’” Rainer said.

Type 3: The Unbeliever or Seeker

This type of person is someone who is not yet a believer —simply put, that’s why they might not be attending church regularly.

“Someone who is not a believer in Christ is not necessarily going to feel the commitment to attend,” Rainer said.

However, Howe said it can be beneficial to have these types of people in your church.

“I would argue that it’s good to have number threes in your church because a lot of times the number threes are [there] because people in the church are inviting them and investing in them,” Howe said. And that, Howe said, is another opportunity for them to hear the gospel.

Another type of infrequent church attendee is the one who attends church less and less because they feel like it’s too “structured,” Rainer said.

“I get what they’re saying,” he continued. “When the structure becomes the end instead of the means, it is institutional. It’s overly structured.”

This is a tendency that’s particularly popular among baby boomers and millennials, Rainer said. And though these people may be well-meaning, Rainer said structure is something necessary for a healthy church.

“If there’s no structure to it, it eventually fades away,” he said.

In making his point, Rainer pointed to the New Testament. In the book of Acts, he said, we see an explosion of evangelism in the new church. Then, in the letters that follow, like Galatians and 1-2 Corinthians, problems begin to arise.

Gradually, more structure starts to emerge in the pastoral epistles in response to these problems, Rainer said. That’s why he said it’s important to have the right amount of structure within a church.

“You have to have it, but don’t let structure drive the church,” Rainer said.

When it comes to engaging the “anti-structure” members of your church, Rainer suggested helping them get involved in particular ministries, so they can see the need for structure in a healthy church.

“If you get people truly involved in the ministry of the church, they will see it less and less as structure,” he said.

This type of church member likely comes as no surprise, Howe and Rainer said.

Often known as the “Christmas and Easter” Christians, these are people who for whatever reason feel a desire or obligation to come to church on special holidays. Howe and Rainer pointed out that Christmas Eve, in particular, is a popular time for people to check out a new church for the first time.

In response to this, Rainer suggested trying to engage these people through holiday services. He added that Christmas Eve services should be kept simple, short, and traditional.

“That’s just a great way to reach people at Christmastime,” he said.

Re-Engaging the 5 Types of Infrequent Attendees

“Sometimes the solution for all of them is just to mention the importance of the local church — not to be ashamed of it.”What’s the best way to re-engage these different types of people? Rainer said sometimes it’s actually quite simple.

“Sometimes the solution for all of them is just to mention the importance of the local church — not to be ashamed of it,” Rainer said.

For Christ-followers, participation in a local body of believers is not optional. It’s not just for special occasions. The local church welcomes unbelievers and seekers, and it thrives under the right amount of structure.

As a whole, Rainer said this topic is one that’s likely sensitive for many pastors.

“I think this issue will become the defining issue of many churches in the west, particularly in North America, and I think you’re going to see more and more that this will be a challenge,” Rainer said, “but it’s not a challenge that cannot be met.” 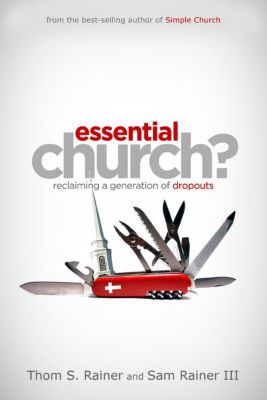