In Lisa Harper’s experience, church leaders have room to grow when it comes to a biblical theology of suffering.

“They seem to see it as negative penance or even just seasonal,” she says. “But pain is often God’s plan to bring Himself glory through a suffering servant.”

Harper, a Bible teacher, author and speaker, explores the theology of suffering through her recently released Bible study, Job: A Story of Unlikely Joy. Through this study, she takes participants on a journey to discover the redemptive side of suffering through the life of a man who lost it all.

“This isn’t an epic story of good and evil. God talks with Satan,” she says. “He condescends to allow the lizard to speak. When God said, ‘Have you considered my servant Job?’ He doesn’t remove His hand; He becomes Job’s publicist.

Pain is often God’s plan to bring Himself glory through a suffering servant.“Because if you look at Job’s situation, it’s not punitive; it’s promotional. God nominated Job for the house of pain because He knew Job would handle suffering so well it would bring Him glory.”

Everything God does is good, Harper reminds. But oftentimes, she says, Christ followers treat people who suffer as though they brought it on themselves—“like they must have some hidden sin or have done something wrong.”

Or, she says, it’s easy for even Christian leaders to forget the pain is usually much bigger than the person or situation—it’s about God, His purpose, and what He aims to do in their lives and for His glory.

Here are two things Harper says church leaders should remember when walking someone through suffering.

Lean in and listen

Harper referenced the story of someone she knew at a church where she served on staff some years ago. The woman—whose husband had a pornography addiction and was unwilling to work—had come to the church office to receive counseling from some pastors on staff.

The woman had been suffering in her marriage this way for a decade. The pain was numbing to her, and was no longer fresh. So when she met with the pastors, they seemed to think she was okay, since she didn’t show any visible signs of grief.

And they gave her some advice and sent her on her way—when, in this situation, Harper says, the pastors should have listened more than talked.

“We can be quick to throw advice at people,” says Harper. “Especially when we don’t even understand the context of their pain. Be a safe place. Sometimes that means not saying anything.”

Be willing to be uncomfortable

Our ministry to sufferers is worth the awkwardness and discomfort, because I don’t think we can get great joy without deep grief.Harper tells another story of a friend who tragically lost her middle school-aged son. When Harper went to the home of the family who suffered the loss, she found her friend so grief-stricken she was unable to speak.

“So I just sat there and held her while she cried,” says Harper. “Not a word was exchanged between us that day.”

Silence or outward displays of grief can make some people uneasy. Many don’t know how to handle situations where someone in their church or community—or even family—is suffering.

These situations can be uncomfortable, and that’s okay, says Harper.

“We’re called to be uncomfortable,” she says. “But where it’s uncomfortable is where you get the gift of ‘other’… a place where many of us don’t realize there’s such depth and beauty. And our ministry to sufferers is worth the awkwardness and discomfort, because I don’t think we can get great joy without deep grief.” 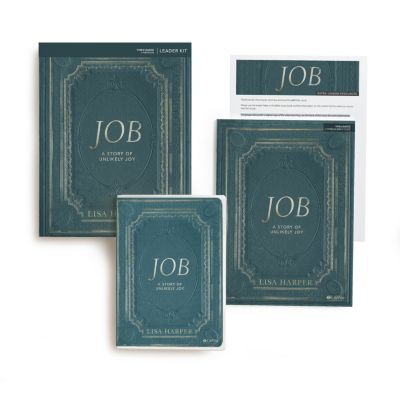 Job: A Story of Unlikely Joy