A North Carolina Southern Baptist Disaster Relief team prepared thousands of meals for residents of New Bern, North Carolina, that vans from the American Red Cross and The Salvation Army delivered to the community. | BP photo by Adam Dukes

While most everyone else was trying to escape the rising floodwaters, Bill Fogarty was doing his best to reach the flooded areas in Wilmington, North Carolina.

Fogarty, North Carolina state ministry coordinator of disaster relief for Baptists on Mission, was turned away twice before he reached Wilmington—one of the areas hardest hit by Hurricane Florence.

“I tried Saturday night and was prohibited from going farther because the road was covered with water,” he says. “So I turned around to go back to Cary. Then I was told we had an alternate route that would work.”

After stopping in Kenansville, North Carolina, at Kenansville Baptist Church to sleep in the RV, he continued his trip to Wilmington, arriving Sunday afternoon. The mobile kitchen—one of several Southern Baptist churches coming from various states—had already beat him there ahead of the floodwaters.

But the condition posed another challenge for Fogarty—and his volunteer team, which also arrived on Sunday.

The truck with food supplies didn’t arrive until Tuesday.

“There’ve been a lot of transportation issues due to road flooding,” says Fogarty. “So when the food truck was delayed because of these issues, we went to Sam’s Club on Monday, got enough food to prepare 2,000 meals for lunch, and then went back to get enough to make 2,000 meals for supper. Sam’s was gracious and donated the food to us.”

By the end of Thursday, Fogarty’s mobile kitchen—set up in the parking lot of the First Baptist Church’s activity center—will have served 26,000 meals. And they’re preparing to serve thousands more over the days and weeks ahead.

Running toward disaster is nothing new for Fogarty. He spent the first half of his 42-year ministry serving as a law enforcement chaplain. And when Hurricane Katrina hit the Gulf Coast in 2005, he answered the call to go serve their residents.

“I was a pastor of a new church plant enjoying life, thinking all was good,” he says.

“One day in 2005, I got a postcard from the state convention that said we have feeding units, recovery units, childcare units, and chaplains, involved in places in Mississippi like Gulfport and Meridian. So I called the number and left a voicemail, saying I was interested.”

He got a call back two hours later, asking if he could be ready to go the next day.

“I went to Gulfport and spent nine days the first time. Then I brought people from my congregation back with me five times after that,” he says. “I’ve been hooked ever since.”

Our chaplains aim to be sensitive to the emotional condition and circumstances people are in.One unique challenge to this deployment is that many of the residents have recently recovered their homes after destruction from Hurricane Matthew in October 2016—only to have to do it again now.

“There’s a pretty great need, but the response has been great,” he says. “There’s a sense of hope among the people we’ve communicated with. Our volunteers are rock stars in my eyes. They have great servant hearts.”

Fogarty says there are partners from Kentucky, Virginia, and Tennessee who are coming to bring mobile kitchens to other affected areas.

But when the waters recede and destroyed homes are more accessible, he says the work will continue in other ways.

These teams will not only provide manual, restorative labor to people’s homes—they’ll minister to people who are “emotionally concerned and stressed,” says Fogarty.

Compassion, he says, is the top priority.

“We don’t hesitate in commitment to share the love of Jesus,” says Fogarty, “but we also recognize timing is important and sometimes it’s just not the time. Our chaplains aim to be sensitive to the emotional condition and circumstances people are in.”

“They Need the Church.”

Toni New, a chaplain with the Billy Graham Rapid Response Team (RRT) is ministering on the ground 100 miles north of Wilmington, in New Bern—one of the most flood-ravaged areas in the Carolinas.

The RRT’s aim is to be a ministry of presence—to provide emotional and spiritual care to people in crisis. The RRT deploys chaplains to areas affected by man-made or natural disasters.

“When people affected begin to rebuild and resettle into their homes, this is a critical time for the church to get involved. The church will be all that’s left. They need the church.”“Many in this community are seniors who have been in their retirement homes, having spent everything they had,” she says. “And now they’ve lost everything. Just a few have insurance, but most don’t have it or are underinsured.

“They’re in shock and denial. Not very many of them are angry. They just can’t believe this happened. They don’t know where to start or what to do next.”

New tells of an elderly woman who had to stay in her home because she had no one close by to help her evacuate. She had been eating cold food in a can from her pantry.

“Her neighbors were finally able to get food for her,” says New. “But she seemed to be lost and afraid. And that’s what we, as chaplains, need to prepare for as we go around and listen to people’s stories and pray with them.”

The RRT has a mobile ministry unit set up in a shopping center parking lot that houses a satellite campus of Port City Community Church, whose main, original campus is located in Wilmington.

And New says it’s the church—the entire body of Christ in southeastern North Carolina—that will continue the work of ministry long after the relief agencies and parachurch chaplains have packed up and left.

“The local church is ultimately the ministry that is best able to reach out to people who have gone through any kind of a disaster,” she says.

“When people affected begin to rebuild and resettle into their homes, this is a critical time for the church to get involved. The church will be all that’s left. They need the church.”

Want to help? Visit the North Carolina Baptists on Mission website or SendRelief.org. 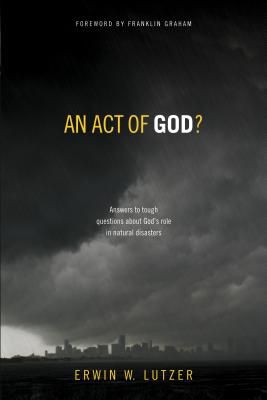 An Act of God?: Answers to Tough Questions about God’s Role in Natural Disasters