Chick-fil-A has famously closed their doors on Sundays since Truett Cathy first founded the restaurant in 1946.

Despite recently opening a location inside Mercedes-Benz Stadium, home of the Atlanta Falcons, the store sits empty during Sunday football games. While viral videos have expressed the impossible longing for the famous chicken sandwiches on Sundays, the company remains resolute.

Virtually nothing can cause Chick-fil-A to serve up nuggets and waffle fries on their day off. But on a few special Sundays, employees heat up the fryers to help their neighbors.“Having worked seven days a week in restaurants open 24 hours, Truett saw the importance of closing on Sundays so that he and his employees could set aside one day to rest and worship if they choose—a practice we uphold today,” the company says on their website.

Virtually nothing can cause Chick-fil-A to serve up nuggets and waffle fries on their day off. But on a few special Sundays, employees heat up the fryers to help their neighbors.

“While Chick-fil-A restaurants are always closed for business on Sunday, some local restaurant teams volunteer to serve their communities in times of crisis,” a Chick-fil-A spokesperson said.

Here are four instances when local Chick-fil-A restaurants have opened on a Sunday.

Donovan and Nikki Carless along with employees at their Chick-fil-A location outside Raleigh, North Carolina, decided to do something to help during Hurricane Florence.

On Sunday, Sept. 16, they prepared and donated 500 sandwiches and 1,200 nuggets to rescue teams from five states and evacuees at three local shelters.

With the power out indefinitely and thousands of people stranded in Hartsfield-Jackson Atlanta International Airport on Sunday, December 17, 2017, Atlanta mayor Kasim Reed made an emergency phone call—to Chick-fil-A.

Following a mass shooting at an Orlando nightclub that left 49 people dead and 53 others wounded, employees at a nearby Chick-fil-A came in on Sunday, June 12, 2016.

They donated food to first responders at the club and to people donating blood to the victims.

A few members of our awesome team decided to go into work on a Sunday and make some food for people waiting in line to donate blood. We love our city and love the people in our community. #prayfororlando

After storms ripped through north Texas near Dallas, Chick-fil-A employees opened up their restaurant on Sunday, December 27, 2015 to provide free sandwiches and other food to tornado victims and first responders.

This morning Chick-fil-A is breaking their own rule and cooking on a Sunday. For the best reason possible, to help feed those first responders and people in need affected by last night's tornadoes.

None of the emergency openings provided a tangible benefit to the company’s bottom line. The store remains committed to being closed for business on Sunday, but that rule has not stopped them from serving those in need—regardless of the day. 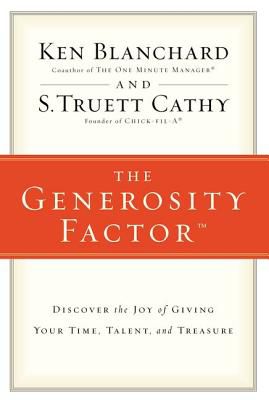 The Generosity Factor: Discover the Joy of Giving Your Time, Talent, and Treasure

Previous Post: « What will it take to plant 1,200+ churches per year?
Next Post: 6 Milestones For Stronger Small Groups »