Do you feel like you don’t make a difference? Do you sometimes think, Why the meetings, why the long hours, and why the hospital visits?

I’m pretty sure Moses felt the same way. You see, he had a bunch of a hard-headed, stiff-necked people in the wilderness, and he probably wondered, Am I making any difference in my ministry?

Pastor, I’ve got some good news for you: You are making a difference.

As I do ministry, I find a lot of other pastors struggle in this area, questioning whether or not they make a difference. Sometimes, I get stuck and wonder the same thing.

During my quiet time this week, the Lord encouraged me with Psalm 106. In the context of the whole chapter, I discovered three incredible words that will change my view of pastoral prayer time forever: “Had not Moses.”

No, it said, “Had not Moses.” One man was crying out to God, and God turned His wrath away from His people.

The overall background of the text is in Numbers chapter 14, when God essentially tells Moses he’s getting promoted. God was fed up with Israel’s rebellion and told Moses he was to be the start of a new great nation.

Moses was shocked at God’s statement. He didn’t say thank you or pat himself on the back or even celebrate his new promotion.

But what Moses did do is what most of you do daily: He stood in the gap for God’s people.

Pastors, here are three reminders for us from Moses’ leadership:

Firstly, Moses was bold! He had the audacity to remind God about His great name. All he did was take a page out of Abraham’s playbook when he stood in the gap for cousin Lot in Sodom and Gomorrah in Genesis 18.

Secondly, Moses believed in the Lord. He believed enough in the character of God—His ability to be longsuffering, His abundant mercy, and His willingness to forgive transgressions.

Moses trusted God. He knew if he could lean into God’s heart, everything would be alright. Just think of what could happen if even just one pastor were to faithfully intercede for God’s people—and believe God will stay true to His Word.

Finally, we see Moses had a burden. He felt the weight of preserving the great name of our God! All Moses wanted was for God to get the glory. He knew if he focused on the name of the Lord, he could make a difference.

And just like Moses made a difference, so do you.

So stay focused, stay faithful and stay on the wall. Therefore, be bold, be believing, and be burdened for God’s people—and watch Him move!

DR. A.B. VINES (@DrABVines) has been the pastor of New Seasons Church in San Diego for the past 13 years and was elected first vice president of the Southern Baptist Convention at the 2018 Annual Meeting. In addition, Vines currently serves as president of the California Southern Baptist Convention (CSBC) and is a trustee at the Ethics & Religious Liberty Commission. He is the husband to Karen, father of four, and “PaPa” to nine. 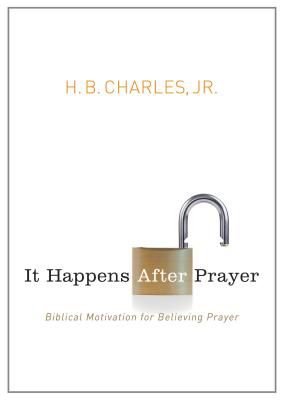 It Happens After Prayer: Biblical Motivation for Believing Prayer