DeAnna Gibson sat in the hallway with her son Zeke and wondered if her churchgoing days were over.

Zeke, who has autism, was having trouble with his Sunday school class. He didn’t want to go back inside. And being in the church’s worship service was difficult for him. So the two sat together and waited for the service to end counting down the minutes until they could get out the door.

“I thought, what’s the point of coming to church if I’m going to sit in the hallway?” Gibson says.

Gibson is not the only parent of a child with a special needs to ask that question. More than a few decide coming to church isn’t worth it.

A new study has found children with autism are almost twice as likely to never attend church or other religious services. And children with other disabilities—like developmental delays, attention deficit disorder, or anxiety—often are missing from the pews as well.

“Across three waves of a nationally representative survey of children in the United States,

it is clear that a number of chronic health conditions are significantly associated with never attending religious worship services,” writes the study’s author, Andrew Whitehead, assistant professor of sociology at Clemson University.

Whitehead says that some families whose children have special needs find getting to church nearly impossible. That’s especially true for children who struggle with communication or social interaction.

While churches may be willing to welcome them and their families, there are often barriers that prevent children with disabilities from participating in worship.

Sometimes it’s as simple as a set of stairs at the front door that serves as a barrier to a child in a wheelchair. Other times, a church’s programs might not have room for kids with special needs. Or well-meaning congregation members may think going to church is a waste of time for children who have disabilities.

“They may wonder, What do they really get out of this?” says Whitehead.

“For children, attitudinal, programmatic, and communication barriers may be the most significant in limiting their participation,” he says. “I have two boys on the autism spectrum, and these three are the barriers we encounter most frequently.”

Autistic kids can be seen as a problem at church

For Gibson, her son’s behavior at church was a point of shame.

Church members often have high standards for how kids should behave, she says. Kids who can’t stay quiet or don’t follow all the rules can be seen as problematic.

“Bad behavior is not tolerated by church people,” says Gibson. And the parents of kids who are labeled as having behavioral problems can be viewed with suspicion.

“We were that loud family on the back pew,” she says.

Complicating matters, Gibson’s husband is a pastor who serves as music minister at their church. So their kids’ behavior was already under the microscope. And skipping church wasn’t an option—even though attending was difficult for their son.

Gibson turned to the internet for help, hoping to connect with other Christian parents dealing with the same struggles. Many, she says, had given up on trying to go to church. It was just too hard.

Gibson wanted something different for her family. She wanted her son to learn about Jesus, and she wanted him to find a place in the church. And she felt he had something to offer to the church.

“Jesus and His church is as much for him as it is for me, and I also felt that the church misses out on something God has for them by not having special needs people in it,” she wrote in a blog post about her experiences.

So what can churches do to make kids with disabilities feel welcome?

Be proactive in helping kids with disabilities

Things changed after Zeke, who is 7, was diagnosed with autism about a year and a half ago. When Gibson explained his condition to church members, they became more understanding. Then a friend offered to pitch in and help.

Having that one advocate made a huge difference, says Gibson. The friend was willing to do whatever it took to help Zeke feel welcome at church.

These days, Zeke has four buddies at church—two teenaged girls and their moms—who alternate spending time with him. They pick him up from his Sunday school class, sit with him during worship, and make sure he has whatever he needs.

That’s allowed Zeke to have friends at church, says Gibson. And it’s allowed her to volunteer with the worship team during the service without worrying. Instead of watching from the hallway, she’s involved on Sundays. And her son feels part of the congregation as well.

Plan ahead to show families you care

About 13 percent of public school students ages 3 to 21 in the United States have some kind of disability, according to data from the Department of Education. It’s likely families whose children have disabilities will show up to your church at some point.

Churches can make them feel welcome by being prepared, says Whitehead.

“One great way churches can dismantle those barriers is to have a system or plan in place for when children with chronic health conditions visit or attend for the first time. They know they are welcomed there and that the congregation is invested in helping them return the next week,” he says. “Planning and preparation signal to these families they are valued and that is key.

And be sure to ask families how best the church can help, says Whitehead.

Gibson agrees. Churches don’t have to have all the answers, she says. They just need to be willing to help.

Having a child with disabilities has changed the way Gibson thinks about her involvement in a local church. She’d been a bit of an overachiever in the past—a Bible study leader, former missionary, pastor’s wife—and a pro at navigating church culture. She always fit in and always had something to offer.

Now she’s learned how to accept help from others. And she’s been able to see the church world as an outsider, someone who doesn’t quite fit in. She’s also been reminded how much church members need one another.

“In the church, we can tend to look at faith as very individualistic—did the sermon speak to me, does this class meet my needs?” she says. “What we miss out on is the importance of fellowship.”

A supportive congregation can be a godsend for families with disabilities. The church can become a respite and a support, rather than one more place they struggle.

“Parents of children with chronic health conditions have to work very hard to navigate a number of other social institutions and organizations, like schools or healthcare. Having to also navigate and advocate for your child on Sundays can be difficult,” says Whitehead. “Having a community where you don’t have to actively advocate for your child, and your child is seen as valuable at the start, can bring peace and joy.”

Churches miss out when children with autism and other health issues are not present, says Whitehead. About 1 in 5 Americans has some kind of disability, he says, and they should not be excluded from worship gatherings.

And all children matter to God, says Whitehead.

“Christ said let the children come to me. If children with autism and other conditions are systematically attending at much lower rates, then perhaps our religious organizations are limiting which children can come to Christ,” he says.

Whitehead believes everyone who comes to church—including children with disabilities—has something to offer. 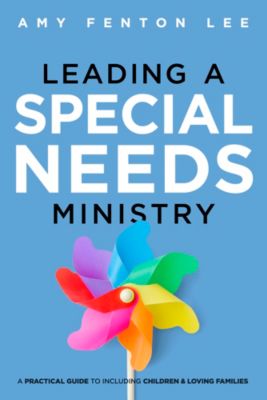 Previous Post: « Seven Reasons to Consider Not Requiring Office Hours for Ministerial Staff
Next Post: On the Horizon: July 30, 2018 »