Churches across the nation rely on volunteers to make their ministries possible. However, many church leaders struggle to recruit and retain the volunteers they need.

In fact, just over 70 percent of respondents to the 2015 National Survey of Congregations said they found recruiting volunteers continually challenging or even impossible.

As such, pastors and church leaders may find new research from the Bureau of Labor Statistics useful, as it paints a picture of who volunteers — and for what types of organizations and activities — across the United States.

The survey, released in 2016, the most recent year such data is available, shows around 1 in 4 Americans, or 24.9 percent, said they volunteered at least once over the course of the year.

Women tend to volunteer more than men, at a rate of 27.8 percent to 21.8 percent, respectively, according to the survey.

White individuals were more likely than those of other races to volunteer, at a rate of 26.4 percent, compared to those who identify as black (19.3 percent), Asian (17.9 percent), and Hispanic (15.5 percent).

Whether or not someone is married with children may also affect the likelihood that they volunteer. Around 1 in 3 married people (29.9 percent) said they volunteer, while about 1 in 5 of those who’ve never married (19.9 percent), and 1 in 5 of those with other marital statuses (20.2 percent) said the same. Parents with children under the age of 18 were also more likely to volunteer (31.3 percent) than people without kids (22.6 percent).

This makes America’s typical volunteer a married, white mother between 35 to 54 years old, with at least a bachelor’s degree.

What types of organizations and activities do Americans volunteer for?

Church leaders may be encouraged by one finding from this study in particular. Researchers found that religious organizations were the main organizations people volunteered for, with 33.1 percent of people responding this way.

Among all volunteers, the most reported volunteer activity was collecting, preparing, distributing, or serving food (11.3 percent), followed by tutoring or teaching (9.2 percent), fundraising or selling items to raise money (9.0 percent), and engaging in general labor or supplying transportation to people (8.8 percent), among other activities.

How do volunteers get involved?

However, some interesting insight can be pulled from the responses of those who said they started volunteering after someone asked them to.

Around 4 in 10 volunteers said they got involved with a particular organization by approaching that organization themselves, so make it easy for your church’s members to figure out how they can get connected to certain ministries.

Regularly provide them with information about volunteer opportunities and be sure to make the next steps clear, so they know who to approach and how to get involved with an organization or ministry.

Another 4 in 10 volunteers said they started volunteering after being asked by someone else — and most often, that was someone who was already involved in that organization. Encourage those who are currently serving in a particular ministry area not only to keep serving, but to invite others to join with them.

You may also find it helpful to reach out to those who are statistically less likely to volunteer. According to this survey’s findings, that includes men, young people, racial minorities, single people, and those with lower levels of educational attainment.

Try to understand the unique barriers to volunteerism that may exist for these groups and encourage them, as well as all the members of your church, to get involved.

Continue to recruit volunteers and build a culture of volunteerism and servanthood in your church, and point people back to the true purpose of serving.

Daniel Im, LifeWay’s director of church multiplication, described it as a way to grow spiritually on a recent volunteer recruitment episode of the 5 Leadership Questions Podcast. 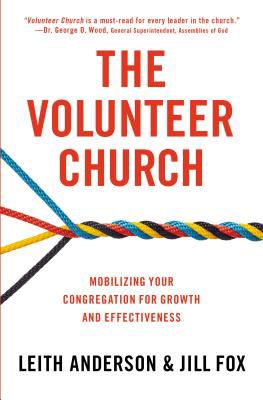 The Volunteer Church: Mobilizing Your Congregation for Growth and Effectiveness

Previous Post: « If You Have to Choose Between Clarity and Creativity
Next Post: 10 Nations Where Slavery Is Most Common Today »