Coronation of David in the Paris Psalter

What may look like simple pieces of broken pottery to most, paints a picture to archaeologist Gabriel Barkay that resembles the ancient kingdom of Israel ruled by David.

Barkay, adjunct professor of archaeology at Tel Aviv University and co-director of the Temple Mount Sifting Project, recently shared some of the artifacts discovered in the mounds of dirt removed from the Temple Mount.

“Some archaeologists have posited that King David and King Solomon were invented by the authors of the Bible,” he said, according to Breaking News Israel.

“I can’t tell you that we’ve got a business card saying, ‘King David,’ but the thousands of coins, stone weights, arrowheads, pottery, mosaic pieces and more show clearly that there was significant human activity at the right time and place to support the existence of David and Solomon’s kingdoms.”

Another find, the base of a pillar bearing the image of an ancient fertility goddess, also points to the religious attitudes of Israelites living during that time.

“The way the pillar was broken shows that it was destroyed deliberately,” Barkay said. The Jewish people of that time would have seen that carving as idolatrous, according to Barkay, and felt a duty to destroy it.

Barkay and Zachi Dvira, an archeological doctoral candidate at Bar Ilan University near Tel Aviv, founded the Temple Mount Sifting Project in 2004, after the Muslim group controlling the area bulldozed a large pit in order to construct an entrance to a mosque.

The duo say that 9,000 tons of soil filled with priceless artifacts has been illegally removed from the Temple Mount area and dumped in the nearby Kidron Valley.

Ironically, moving the dirt from the contested area allowed archaeologists to comb through it and make significant archaeological finds.

Previously, the sifting project announced the discovery of ancient Jewish coins dating back to the time recorded in the Old Testament books Ezra and Nehemiah.

“These were the first coins ever minted by the Jews,” Dvira said.

The project has survived so far on private donations, but the two project leaders hope to receive government funding to continue what they believe is vital archaeological work.

“This is unknown territory,” they said. “There is still a lot of work ahead. Every single artifact is a world unto itself.” 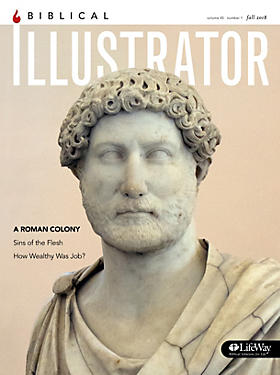 A quarterly resource that helps you understand the culture of biblical times so that you can better apply biblical truth.

Previous Post: « American Churchgoers Divided Over National Pride
Next Post: If You Have to Choose Between Clarity and Creativity »