Depending on who you ask—evangelicals are one of the largest religious groups in America.

Or they are few and far between.

Evangelicals are growing. Or they are in decline.

In other words, it’s complicated—even for researchers who study religious groups for a living.

And while evangelicals have been making headlines the past few years, it’s not always clear which evangelicals the news reports are talking about.

That’s in part because evangelicals don’t have a pope or an official institution that defines their theology. And many aren’t part of a denomination that can keep track of them.

“At its heart, evangelicalism is more about a group of teachings than an institution,” says Scott McConnell, executive director of LifeWay Research.

All three methods of evangelical identification have strengths and weaknesses, says McConnell.

All three are trying to measure what religion researchers call the three “Bs”— belonging, behavior, and belief. And each offers a different picture of what evangelicals look like.

“When you’re reading an article, book, or news report about evangelicals,” says McConnell, “it’s important to know which approach to identification was used.”

Are you an evangelical?

The most common approach—known as self-identification—is to ask people, “Do you consider yourself a born-again or evangelical Christian?”

If they say yes, they’re counted as evangelicals.

“It’s the easiest method—because it’s one question—and it’s fairly effective,” says McConnell. “We do see differences between Americans who are self-identified evangelicals and those who are not.”

Pew Research, one of most influential research organizations in the United States, uses self-identification for many of its surveys. First, researchers ask several questions to sort Americans into distinct faith groups—Protestants, Catholics, Jews, Muslims, other non-Christian faiths, or nones (those with no religious affiliation). They also ask if respondents self-identify as evangelicals.

But this approach has downsides, says McConnell. For example, there are people who attend evangelical churches but don’t like the evangelical label and so they don’t call themselves evangelicals.

“It’s helpful to see if someone feels like they belong to a particular group of people,” McConnell says. “And it gives a hint that they identify with some of the teaching and behaviors that go along with that group’s label.”

Where do you attend church?

Researchers also use a set of guidelines—known as RELTRAD, short for “religious traditions”—to sort people by denomination. The General Social Survey (GSS) uses this method. So did Pew in its 2008 and 2014 Religious Landscape Surveys.

Researchers then ask what denomination a person belongs to or what is the denomination of the church they most often attend. If people say they are Baptist, then researchers ask if they are Southern Baptist, National Baptist, Free Will Baptist, Missionary Baptist, etc. Individuals are then sorted into one of the three Protestant categories based on denomination and race: evangelicals, mainline Protestants, and black Protestants.

There are fairly distinct differences in how people in the different streams of Protestantism—evangelicals, mainline Protestants, and black Protestants—respond to survey questions. Those groups respond differently from Catholics and Orthodox traditions as well. Those differences are helpful, says McConnell, in seeing how distinct Christian groups view social, ethical, theological, and practical questions.

Researchers can also compare how Christian groups and non-Christians respond to different questions.

“Some of the core characteristics shine through,” he says.

What do you believe?

In recent years, researchers have begun identifying evangelicals by their beliefs. For instance, Barna identifies evangelicals based on nine shared beliefs.

In 2015, the National Association of Evangelicals and LifeWay Research developed a definition of evangelical belief based on the “Bebbington quadrilateral.” That framework looks at four key characteristics of what evangelicals believe—the centrality of Jesus’s death on the cross; a high regard for the Bible; the importance of conversion or new birth; and a focus on actively sharing one’s faith.

LifeWay and the NAE also consulted with a group of theologians and church leaders—and tested a series of questions before settling on a set of four core statements.

Those who strongly agree with each of these statements are considered evangelical by belief:

A LifeWay Research survey of adults in the U.S. found fewer than half of self-identified evangelicals qualify as evangelicals by belief.

Evangelicals by belief are also more diverse than self-identified evangelicals.

Fifty-eight percent of evangelicals by belief are white, 23 percent are African-American, and 14 percent are Hispanic. Five percent claim another ethnicity.

By contrast, 70 percent of self-identified evangelicals are white. Fourteen percent are African-American. Twelve percent are Hispanic, and 4 percent claim another ethnicity.

One of the challenges of using the evangelicals by belief model is that evangelicals don’t always agree on what they believe.

However, this approach—combined with others—sheds more light on the evangelical movement, says McConnell.

“When we’re talking about religion, we care about theology,” says McConnell. “This is the only approach that directly measures such beliefs, allowing researchers to look at evangelicals from a different angle.”

The question of race

Perhaps the most complicated part of categorizing faith groups in the United States involves race.

For example, for years Gallup has asked people if they are born again or evangelical, but then counts only white respondents as evangelical. African-Americans are counted as black Protestants.

The Public Religion Research Institute (PRRI) counts white Protestants who say they are born again or evangelical as white evangelicals. Protestants from minority groups are classified as black, Hispanic, or other Protestants.

This approach may have to be reworked in the future as evangelicals—like the rest of America—become more diverse.

McConnell says for now, splitting Protestants into three categories—evangelical, mainline, and historically black—is still effective. Christians in each of those categories tend to hold distinct views on how to apply their faith to cultural issues—as well as to issues in the church.

And there’s a long history of church divisions along denominational and racial lines. That has shaped how Christians in different groups practice their faith.

“Our history still affects us,” he says. “Still, we may have to rethink these categories in the future.”

As the debate over the word “evangelical” continues—with some Christians dropping the label completely—many wonder if the term can be saved. McConnell believes the theological meaning of “evangelical” still matters.

“The word ‘evangelical’ comes from the Greek word for ‘good news,’” explains McConnell, “and the mission of sharing the good news of Jesus Christ isn’t going away.” 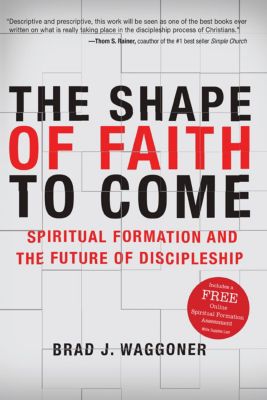 The Shape of Faith to Come