The retirement of Supreme Court Justice Anthony Kennedy has sparked renewed hope that Roe v. Wade, the ruling that legalized abortion nationwide, could be overturned.

In the midst of this, some have expressed doubts that such a move would actually help.

First, it is true overturning the decision will not automatically make abortion illegal across the country. It will only send the issue back to the states to determine their individual responses.

It’s also the case that most Americans oppose overturning the ruling and abortions are decreasing. Only 29 percent of Americans say they support overturning the decision, while abortion rates have fallen to the lowest rates since Roe v. Wade.

Despite that, Christians should still work toward and support the overturning of Roe v. Wade. We should do so, however, recognizing it will be more of a beginning to the journey than the end.

Yes, only a few Americans currently want to overturn Roe v. Wade and abortion is a perpetually heated subject with significant numbers of Americans falling on both sides of the issue.

But, changing the laws—or, in this case, having the opportunity to change the laws—can impact popular opinion. Look at same-sex marriage and civil rights.

Same-sex marriage saw dramatic increases in popularity as laws around the country changed.

In 2004, when Massachusetts became the first state to legalize same-sex marriage, only 31 percent of Americans, including 11 percent of evangelicals, supported the idea.

Often laws are reflective of societal norms (Obergefell v. Hodges), but sometimes they can be aspirational—pushing cultural opinion instead of following along with it.

While today, the vast majority of Americans sees the Civil Rights movement as a positive and quote approvingly from Martin Luther King’s “I Have a Dream” speech, that wasn’t always the case.

One month after passing the Civil Rights Act of 1964, only 54 percent of Americans supported the legislation.

After King’s march on Washington in 1963, 60 percent of Americans had an unfavorable view of the march, saying they believed it would be ineffective at best or cause additional violence.

Yet the legal shifts became part of the changing narrative around racial equality in the United States. Laws don’t change hearts, but laws that reflect biblical values can help people understand truth.

Removing Roe v. Wade and the legacy of nationwide legalized abortion is undoubtedly a good thing. And it can play a role in shifting the opinion of skeptical Americans until we develop a more comprehensive pro-life culture in our nation.

But overturning Roe v. Wade is obviously not the only part that is required. A potential Supreme Court decision would, at best, return this issue to states and Christians must then work on passing life-affirming laws in their state.

But we cannot be so consumed with the legal question that we forget the cultural and personal ones.

Currently, large portions of the population are held sway by the idea that personal empowerment should come at any cost. We have to tell a better story.

Positively, we should demonstrate how protecting life in the womb leads to an increase in human flourishing for everyone. Negatively, we must remind people that the devaluing of any human life is a threat to the value of all human life.

And part of that shift will come from how Christians and the pro-life community respond in the aftermath of a potential overturning of Roe v. Wade.

Christians have worked to counter the idea that we only care about life inside the womb. Pro-life centers provide assistance to women before and after their pregnancies.

If Roe v. Wade is indeed overturned and abortion becomes illegal in some states or even severely restricted, many women will be faced with unplanned pregnancies without a support system. What a perfect opportunity for Christians to have the hands and feet of Jesus.

Yes, Christians and churches do a lot now, but we will have to do even more in a post-Roe landscape.

Here are some ways your church can help to create a holistic pro-life culture.

Love single, pregnant women — It’s not a rejection of biblical commands on sexuality to help a woman with an unplanned pregnancy.

Donate to local crisis pregnancy centers — The needs will be even greater if abortion is removed as an option. More women will be visiting these centers looking for help.

One way is to organize an annual baby bottle fundraiser. Invite church members to take home empty baby bottles and fill them with change and donations for local crisis pregnancy centers.

Provide post-pregnancy care — According to the National Institute of Mental Health, postpartum depression occurs in nearly 15 percent of births. Beyond that, up to 80 percent of moms suffer from “baby blues.”

Offer parenting help — Looking at the face of a new baby and realizing you have no idea how to do this parenting thing can be overwhelming. Set up a class to help new parents. Find more seasoned parents to serve as mentors.

“Adopt” single moms — The church will need to come alongside single moms. Offer vouchers for church daycare. Babysit for them. Have other moms ready to run errands or simply serve as a listening ear.

Get involved in foster care and adoption — With fewer abortions, there will undoubtedly be more children in need of help. Plan ways your church can facilitate foster and adoption care.

Be proactive — Churches often provide assistance, but many in the community have no idea those things exist. Don’t just provide help. Make sure those who need the help know about what’s available.

Again, if Roe v. Wade were to be overturned, that will only be the beginning of the journey. Christians should celebrate that milestone but prepare for all the work that is left to do to ensure a culture that values and affirms life. 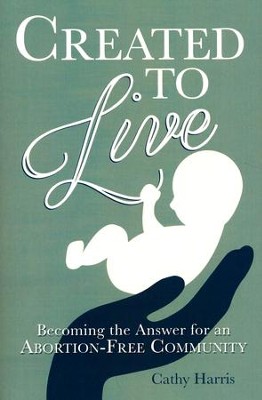 Created to Live: Becoming the Answer for an Abortion-Free Community