Show Dogs, a kids’ movie about an undercover police dog, was generating significant social media buzz and media stories after its opening weekend—but not in a good way.

The National Center on Sexual Exploitation said a scene in the film sends a “troubling message that grooms children for sexual abuse.”

In the scene, a human officer tells the police dog to “go to his zen place,” or disassociate himself from reality, to endure having his private parts touched in an inspection.

Since the uproar, this particular scene has been edited out of the film. But in the wake of the controversy, many parents and ministry leaders may wonder how real-life sexual predators commonly “groom” their potential victims.

“Grooming” is the process used by child sexual abusers to create access to children, select a specific child, prepare that child for sexual interaction, and then keep the child silent.

They choose a ‘fringy’ kid

“What I mean by ‘fringy’ is a child on the edge of the herd,” says Kimberlee Norris, co-founder of Ministry Safe, a consulting organization that helps churches create safety systems to meet legal standards of care and reduce the risk of child sexual abuse.

“Abusers tend to gravitate toward a child who is less involved, in need, or in the midst of personal crisis, like a divorce or difficult family life. Or a child who is looking for someone to follow or trust, perhaps from a single-parent home.

“Sometimes the targeted victim is an introverted child, one with slower social development, or a child with a disability,” explains Norris, who has represented victims in child sexual abuse litigation for more than 25 years.

“These kids are less likely to speak about any abuse, let alone be believed.”

They have a pattern of breaking rules

Predators break the rules—perhaps setting up time alone with the targeted victim—and then “they tell you why it was OK for them to do that,” Norris says. “They pride themselves in being mavericks who do things their way.”

She says predators can be excessively controlling with kids and teens, displaying narcissistic tendencies, but can also be “phenomenally charming.”

This is when abusers start incorporating playful touch—like tickling or wrestling—in their interactions with potential victims, Norris explains.

“They tend to be touchy with kids and teens,” she says. “They are barrier-testing, figuring out what kind and level of touch kids will accept.”

“If a girl is being groomed, communication from the perpetrator will be relational and affirming. They’ll say things like, ‘You’re so mature for your age. You’re so pretty.’ Or, ‘It’s so hard to believe you’re only (insert age).’”

When a male abuser grooms a male victim, Norris says, it is very common for some form of pornography to be used.

“And it’s almost always the female form portrayed,” she adds. “Abusers assume the boy is interested in the female form, and they feed an existing interest or appetite.”

Norris and her law partner and husband, Gregory Love, provide online screening training through Ministry Safe that focuses on male and female offender characteristics from decades of offender studies.

“This information should be in the hands of every ministry professional or senior pastor who hires ministry personnel,” says Norris, “and it should be used to screen ministry applicants with questions meant to expose offenders.” 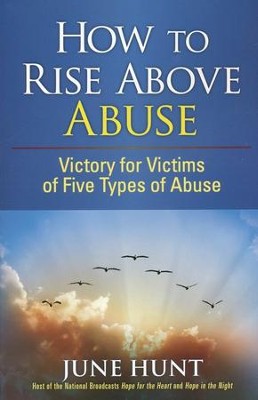 How to Rise Above Abuse: Victory for Victims of Five Types of Abuse