Though we all are confronted with death and must deal with personal loss, we never seem to know what to say to someone else going through grief.

Sometimes, even if we have the best intentions, we can say something that is emotionally hurtful or theologically off-base.

Here are seven things to avoid saying at a funeral or to someone grieving the loss of a loved one.

No, they’re not. Nowhere in Scripture does it teach that deceased humans become angels. Don’t let cartoons and pop culture ideas influence your understanding of death.

Not only is it wrong, it can be insensitive as well. Don’t try to diminish the grief of someone by spouting off trite (and inaccurate) sayings.

Yes, virtually all of us have suffered loss, but none of us has the exact same experience or feelings. This makes the conversation about you and not about the person who is suffering.

If you have been through a similar tragedy—such as losing a spouse or child—tell the person that you’d be glad to talk when they feel up to it. Don’t push them, but follow up after a few weeks once things have settled down. Let them know you will be there for them.

“They look so good.”

One of the most awkward experiences is seeing the body of the person in the casket. The temptation can be to compliment the appearance of the body or note how it “looks just like them.” Don’t do this.

In reality, we all know the body doesn’t look good. It doesn’t look right because it’s not. After Adam and Eve fell, death became an unwelcome resident of God’s good creation. The dead body looks unnatural because it is, and no amount of soothing words can make that any less of a reality.

Yes, Christians do not grieve as those who have no hope (1 Thessalonians 4:13), but we do grieve. For, some that means floods of tears. For others, that may mean silent reflection. Work to bring comfort, not grief judging.

“At least it wasn’t worse.”

This should be obvious, but too often it’s not. Saying something like this will not make the person feel better or lessen their loss.

Don’t try to point how other people have had it worse or try to get the grieving person to “look at the bright side of things.” Allow them to grieve without feeling guilty for it.

Yes, this is true. Yes, this is biblical. Yes, God has promised to work all things together for the good of those who love Him and are called according to His purpose (Romans 8:28). But no, you shouldn’t say it to a person immediately after their loved one died.

We can rest in God’s sovereignty and trust in it, but still not want to hear a trite “everything happens for a reason” as we stifle waves of grief.

This may sound comforting, but in many ways you are placing the onus on the person trying to keep their head above water. Instead of asking them to tell you, look for ways you can meet a need without being asked.

They’re probably not going to call you to ask for something, but they may gladly receive a meal, some help with paperwork, or an offer to pick up kids from school or take them to soccer practice.

Be close enough that you can see the needs they have and meet them without making the grieving family contact you to ask for help.

What can you say instead?

In many ways, just saying, “I’m so sorry for your loss” can go a long way in communicating care and presence.

Maybe try sharing your favorite memory of their loved ones. I know one of the unexpected comforts during the grieving process was gathering with family members and reminiscing and telling stories.

If all that fails, just hug them or sit with them in silence. You can communicate a lot without saying a word. It’s better to say nothing than to say something that will do more harm than good. 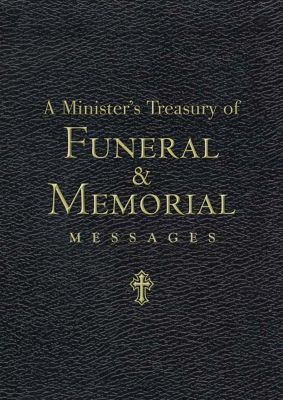 A Minister’s Treasury of Funeral and Memorial Messages

Previous Post: « Can Guests Find Their Way at Your Church?
Next Post: Most Americans, Even the Unchurched, Love VBS »