Bart Millard couldn’t have imagined the impact a hastily written song would have on the world when he first penned I Can Only Imagine, alone on a tour bus at 2 a.m.

But the song—composed in just a few minutes—is still being played on airways nearly two decades after it was written. Now, a major motion picture is capturing the story behind the hit song.

The film, I Can Only Imagine, premieres today (March 16) in more than 1,600 theaters nationwide.

While you can probably hum the chorus of the catchy ballad that inspired the movie, here are 13 facts you might not know about I Can Only Imagine.

1. I Can Only Imagine is the best-selling Christian single of all time.

Having sold more than 2 million digital copies, I Can Only Imagine is the only song in the Christian music genre to ever go double platinum.

2. The song had great mainstream success despite prominently mentioning Jesus in the chorus.

I Can Only Imagine crossed over to pop and country radio. It peaked at no. 33 on Billboard’s Mainstream Top 40 and no. 52 on Country Airplay.

3. Millard wrote the song in 10 minutes.

Millard says he came up with the song in the middle of the night alone on a bus after a concert. He was moved by the phrase “I can only imagine,” written in a notebook he was thumbing through at the time. The entire song came together in a matter of minutes.

4. The music video has some famous cameos.

Inspired by fans at concerts showing the band photographs of deceased loved ones, the music video for “I Can Only Imagine” features people holding empty picture frames that eventually house photos of those they’ve lost.

In addition to MercyMe and everyday people, several CCM artists appear with images of their deceased loved ones—Michael Tait of dc Talk and Newsboys, Bob Herdman of Audio Adrenaline, Jesse Katina of The Katinas, and Tammy Trent.

5. I Can Only Imagine has been played in space.

The song served as a wake-up call for NASA astronaut Barry E. Wilmore on mission STS-129 to the International Space Station.

6. The song was not the first single released from MercyMe’s Almost There album.

That honor went to Bless Me Indeed, a song inspired by the book The Prayer of Jabez.

Bless Me Indeed underperformed on the radio and Millard later called it “one of the worst songs we’ve ever done.”

7. I Can Only Imagine was inspired by the death of Millard’s father.

Millard was a teenager when his father passed away after a battle with cancer. Millard says the song—written a few years later—helped him focus on Christ rather than the pain of losing his father.

“[I Can Only Imagine] is about when I see Christ, and that’s because I’d rather be obsessed with that than an empty bedroom or him not being around,” Millard said in an interview with World Vision. “It was my way of coping.”

Award-winning actor Dennis Quaid stars as Millard’s father. He has spoken to BeliefNet and Christianity Today about growing up Baptist and his current faith. He also wrote a song for the film’s soundtrack: “On My Way to Heaven.”

8. There’s another reference to Jesus in the song.

The second stanza of the song features the line, “I can only imagine when that day comes when I find myself standing in the Son.” While it may not be clear on the radio whether the word is “sun” or “Son,” it’s another reference to Christ.

9. I Can Only Imagine changed the musical image of MercyMe.

Millard says MercyMe was a rock band when the group got its start. However, the popularity of I Can Only Imagine—written as a piano-driven ballad—caused the band to primarily be recognized in the adult contemporary genre.

10. The song dominated the Dove awards.

MercyMe released I Can Only Imagine on the Almost There album on August 14, 2001—just 28 days before 9/11. The song, which evokes hope in the life to come, became a comfort to many Christians as they processed news of the terrorist attacks.

12. The song has been covered by many artists.

While MercyMe has the most-recognized version of I Can Only Imagine, the song has also been covered by Amy Grant, Wynonna Judd, Emerson Drive, Marie Osmond, and Tamela Mann.

MercyMe also recorded a version of the song with the London Symphony Orchestra and released a special rendition to go along with the movie.

13. The movie has generated significant buzz prior to its opening.

As the movie opens in theaters today (March 16), the trailer has been viewed 47 million times on Facebook. In preview showings on Thursday night, the film surprised industry insiders with a $1.3 million one-day haul.

This week, Bart Millard shared that the film was the top seller on movie ticket site Fandango.

Soooo currently we are the top selling ticket on Fandango. YIKES!!! 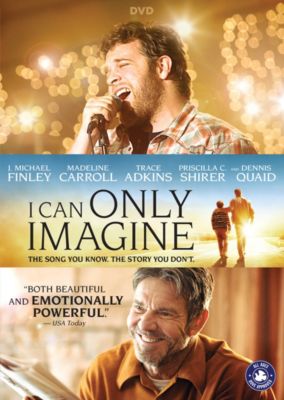 I Can Only Imagine DVD

Previous Post: « ‘Crucified Stormtrooper’ Stirs Controversy in a Church Not So Far, Far Away
Next Post: Four Preaching Don’ts to Avoid »