Not for herself, but visiting her kids.

She and her husband adopted all four of their children out of foster care. Three of them suffer on some level from mental illness, be it depression, anxiety, bipolar disorder, or schizophrenia.

During a recent parenting conference hosted by the Ethics and Religious Liberty Commission, she and other subject matter experts discussed how the church should approach ministering to teens and kids who suffer from mental illness, and serving their families.

Rosati wants to debunk the notion that mental health is a spiritual issue—particularly for others, like her, who struggle to parent kids who’ve been diagnosed with mental illness.

“It’s harmful for the church to tell people who suffer from mental illness and their families to pray harder,” said Rosati from the stage.

“Don’t tell someone whose brain isn’t working to pray a little harder. Don’t confuse parenting with getting professional help.”

Rosati says 20 percent of teens will experience depression before adulthood. And those teens, she adds, are 12 times more likely to die by suicide.

Ever since 19-year-old Nikolas Cruz—a teen diagnosed with depression—opened fire in Marjory Stoneman Douglas High School in Parkland, Florida, on February 14, the national conversation has turned toward several factors that may have contributed toward this tragedy.

The shooting has prompted chatter in Christian social media circles about gun control and multi-system failures. But there also has been focused conversation around mental health and prayer—or lack thereof—in schools and in the public square.

Multiple reports say once Cruz turned 18 he refused mental health services offered to him by the school district. There are also reports suggesting behavioral health professionals made the wrong call when they failed to hospitalize him following a 2016 examination.

Furthermore, it’s been said his mother, who died of pneumonia in November 2017, had called the police on several occasions when his behavior escalated—as an attempt to scare him into compliance.

If Cruz had been a churchgoer, might have he received pastoral or congregational care—and perhaps avoided carrying out the massacre of 17 people?

A 2014 study conducted by LifeWay Research and sponsored by Focus on the Family showed two-thirds (66 percent) of the 1,000 pastors surveyed do not address mental health issues from the pulpit.

It also found over a quarter (27 percent) of churches don’t have a plan in place to minister to individuals and families affected by mental illness. And less than a quarter (21 percent) of family members are aware such a ministry exists within their church.

In another study—just the year prior—LifeWay Research found a third of Americans, and nearly half of evangelical, fundamentalist or born-again Christians believe spiritual activities like prayer and Bible study can overcome serious mental illness.

While prayer and church involvement is important for any struggle—corporate or individual—more is needed to treat depression, anxiety, or any other mental health issue, said Rosati.

She urges families to seek church-led spiritual guidance and prayer on behalf of their loved one who suffers from mental illness. But she also cautions them not to ignore the clinical side of treatment.

“What I want to say to parents and families is, please keep in mind that neurochemical issues are not spiritual issues,” she said during the panel discussion.

“When our kids are broken and don’t work the way they should, our duty as parents is to advocate for them and give them the help they need.” 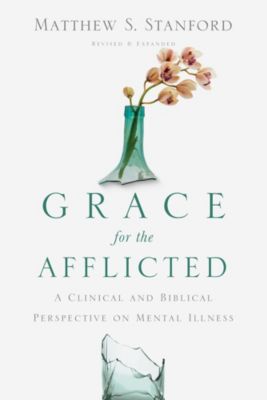 Grace For the Afflicted: A Clinical and Biblical Perspective on Mental Illness