Recently I stood beside a football field here in the Seattle area, watching my son Caleb’s practice. Next to me stood another father. As we struck up a conversation, he asked me what I did for work.

I had to think about it for a minute.

I could tell him I’m an author or a consultant or a community developer. Technically, all are true.

However, the Spirit wouldn’t let me.

“I’m sorry for you,” he said. “We hate you out here in the Northwest.”

His comment didn’t surprise me. Seattle is a place where people don’t like to go to church.

Pacific Northwesterners are mostly nonreligious. A 2016 survey by the Public Religion Research Institute found 35 percent of Washington residents are religiously unaffiliated—compared to 24 percent of Americans as a whole.

According to Pew Research, Washington state has the fifth lowest percentage of highly religious adults in the country. The same report says fewer than half of Washington residents (46 percent) pray daily, and slightly more than half (55 percent) “believe in God with absolute certainty.”

And according to the 2010 Religious Congregations and Membership Study, only about a third had ties to a congregation.

It’s not a place where people trust pastors or churches. Still, it’s been my home for more than 20 years—a place where I love to minister.

Be with and become

In 1991, I moved from Michigan to Seattle for a youth pastor role. The church that hired me was welcoming and hospitable, but the city was not known for warmth. In fact, many call what I experienced in my new city the Seattle Freeze.

Take in a Seahawks or Sounders game and you’ll find we’re full of passion. However, the passion is hidden behind skepticism and disguised angst.

Add in the fact that I’m a pastor and Seattle wasn’t a warm and friendly place.

I’ve watched many church planters and pastors move here from other parts of the country seeking to maintain what they had back home, only to find themselves heading back to warmer climates and warmer people.

I’m convinced you won’t effectively make disciples here unless you’re willing to stay long enough to become one of us. This is likely true everywhere, but it’s especially the case out here with the freeze.

The first thing I had to do is the thing every pastor must learn to do: be with and become.

In The Message, Eugene Peterson paraphrases John 1:14 this way: “The Word became flesh and blood and moved into the neighborhood.” Jesus fully related to everything we experience by fully becoming human and dwelling in our space.

British missionary Hudson Taylor was known for embracing the culture of the Chinese for the sake of the gospel. He dressed Chinese, ate Chinese, lived in Chinese housing, observed the local customs and etiquette, and even refrained from receiving protection from British consular authorities. He was said to have gone to China a British man and returned to Britain a Chinese man.

I’ve been in Washington long enough now that when I return home to visit my family in Michigan, it’s clear I don’t belong there anymore. I am now a Pacific Northwesterner.

However, this didn’t happen overnight. I have immersed myself into this place for a long time. I drink the coffee (yes, we’re all coffee snobs). I have the rain gear (sans umbrella—a sure way to tell who’s not from Seattle). I’m into natural medicine. I care about recycling and the preservation of all God’s creation. I could go on, but I think you get it.

Be visible and vulnerable

Some of the so-called Seattle freeze is due to the kinds of people the region attracts. The greater Puget Sound is drawing tens of thousands of employees to work in the tech industry. More than 1,000 people a week move to the area due to Amazon’s growth, artificial intelligence research and development, and ongoing expansion in the gaming industry.

Many of them are introverts. And many are newcomers. Our region is now full of relationally disconnected people. They just haven’t had time to build deep relationships.

And it’s harder these days, especially in tech-savvy Seattle, for people to build those relationships.

These days, it’s common for people to hide behind the polished version they present on social media platforms. And it’s hard to become friends with someone’s façade on Instagram.

Real-world relationships require getting beyond that façade. They require emotional honesty and physical presence.

Recently I led a training event where participants shared personal stories with seven other people at their table. A woman in her 60s admitted she was incredibly outgoing on social media but completely panic-stricken about sharing her story in person.

As the one leading the class, I started by vulnerably sharing how God’s story had changed my story. Several people told me this had a profound effect on them. They had never observed a pastor openly share his own brokenness as I did while also communicating how God was actively changing me.

It’s not uncommon for me to share my personal struggles and sin while I’m preaching—so that it’s clear I need the message I’m preaching.

I’m in a community of people who see my life and watch my interactions with my wife and children. They know my sin and can attest that I need grace as much as anyone. I can’t call people to go to a place I’m not willing to go. And I can’t expect them to go there if they don’t also see what it looks like.

Since most people attending our church spend the majority of their days at work, my job as pastor is to equip them for ministry in the workplace.

I remind them church isn’t an event on Sunday; church is the people of God sent on the mission of God everywhere and every day.

The primary mission field here in the Pacific Northwest is the workplace. People need to know work is good. Work is from God. And work is a great place to show what God is like and what He has done for us.

I regularly remind God’s people to work heartily as unto the Lord and not unto man (Colossians 3:17, 22-24). I remind them going to work is more than receiving a paycheck, praise, platform, or promotions.

I encourage them to see their work as an opportunity both to display what God is like and to extend God’s love and grace to other employees. They are blessed with skills, abilities, and a job in order to bless their colleagues, their company, and the world.

Be present and listen

Sometimes, the most important thing we can do is to simply be there and listen.

Take my football sideline friend. I asked him why he thought people in our community hated me. He told me most people out here are secular skeptics or burned out on religion.

That was true for him as well. He’d once lived in Texas, where he pretended to be a Christian “because everyone is a Christian there.”

“I had to pretend in order to get and keep business,” he said. I could tell he’d become jaded about Christianity.

For the rest of the practice, I asked him about his life, his marriage, and work. At one point I asked him why, if he hated pastors so much, he kept talking to me.

“Well, you seem different from most,” he replied.

Unfortunately, most people’s experience of Christians or pastors has a repellent effect. We can be overly talkative, pushy, judgmental, and lousy at being present and truly listening.

Christian apologist and author Francis Schaeffer said, “If I have only an hour with someone, I will spend the first 55 minutes asking them questions and finding out what is troubling their heart and mind, and then in the last five minutes I will share something of the truth.”

We need to cultivate an ability to be truly present with people and really listen.

Through regular time in solitude and silence before God I’ve learned to quiet my heart and mind enough to be fully present with another human and truly listen—not only to their words but also to their hearts.

I listen for the longings, the pains, the disappointments, and the hopes. The more I do, the more doors open for me to show the good news of Jesus in tangible forms of serving, as well as to share the good news through words.

I find the visible must precede the verbal here in the Northwest. People will not trust what you say unless they’re convinced you’re genuine. People can sense whether you really care or if they are a project. And, once convinced, they’ll gradually open up their lives no matter how cold their exterior might be.

I love the Pacific Northwest. It’s not as cold (or wet) as people think. If you stay long enough, become one of us, work to bring warmth, and listen to hearts, you’ll see we’re all longing for the same love and mercy found only in Jesus. We just need His grace to break the ice and melt the freeze.

I expect the people near you are not very different.

JEFF VANDERSTELT (@JeffVanderstelt) is a pastor, speaker, author, and founder and visionary leader of Saturate and the Soma Family of Churches. He serves as a teaching pastor and director of Missional Communities at Doxa Church in Bellevue, Washington. His is the author of the LifeWay Bible study, Making Space: Doing What Matters Most. 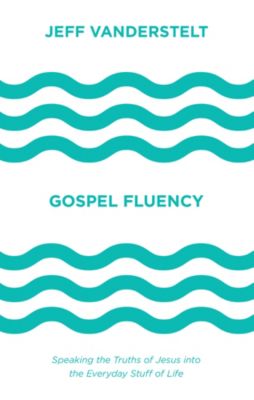 Gospel Fluency: Speaking the Truths of Jesus Into the Everyday Stuff of Life

Previous Post: « One Place in a Rural Community You Will Find Hurting People
Next Post: A Great Commandment Pastor »