It’s a Sunday morning in Düsseldorf, Germany. Historic houses of worship stand out on most street corners. Their architecture often evokes a sense of wonder. Inside, however, many are empty, supported solely by a tax to preserve the landmarks’ external beauty.

But during the week leading up to that Sunday, around 60 locals, some singer/songwriters, and a barista serving up good coffee convene in a pastor’s home for a house show. Most of the guests are not churchgoers, let alone Christians.

These guests are being engaged in gospel-centered community—without darkening the doors of a church building.

Gathering in homes or otherwise engaging society outside the walls of a church building is what it takes throughout most of Europe—and increasingly in North America, says missionary and church planter Josh Baylor, the pastor hosting the house shows in Düsseldorf.

He and other faith and culture experts believe we live in a post-Christendom age: a time when Christianity is no longer a cultural pivot point and when the church is on the margins of society.

And that, Baylor says, is a very good thing.

He even believes this post-Christendom age is a necessary thing for the church to grow and thrive.

“In our current age, a church can have a bunch of programs to fill up the week,” says Baylor, who serves with the International Mission Board. “But those events don’t connect with the current generation. It looks like a busy church, but no one is a part of it.

“A church on the margins has to strip all that away. We need to examine what it looks like to be in real gospel community in everyday life—not just showing up to a building.”

According to Pew Research, the Christian population declined from 2010 to 2015 in Europe, the only continent where that was the case. And the United States appears to be trending the same way.

The percentage of religiously unaffiliated Americans jumped from 16 percent in 2007 to 26 percent in 2017, Pew found. Using several religious belief and action questions, a 2016 Barna Research report contends nearly half (48 percent) of Americans are considered post-Christian.

“This will force us to reform and refashion how to be the church,” Baylor says.

Increased solidarity is one way the church can benefit in a post-Christendom age, says Walter Strickland, who teaches theology and serves as associate vice president for kingdom diversity initiatives at Southeastern Baptist Theological Seminary.

“We need to ask ourselves how we can have a credible witness in a society where we no longer have the ‘home field advantage,’” says Strickland. “We should start looking more like the church in Acts and the rest of the epistles.”

Ironically, he notes, the church is stronger when on the fringes of society and not in power. “A lot of solidarity happens among those who are in Christ across denominations, cultures, ages, linguistics, out of necessity for us to be unified,” he says.

Strickland recalls being on a mission trip in Amsterdam, a place where half of the adult population identifies as atheist and only 15 percent claim to be Protestant, according to a 2016 report from Statistics Netherlands. While evangelizing, he and his group were thrilled to cross paths with a man from a different Christian denomination.

“My affinity for this Presbyterian brother was through the roof,” Strickland says. “There are not many Christians in Amsterdam, particularly evangelical Christians.

“As I was flying home, I thought about what changed the way I see that person on foreign soil versus when I interact with someone from a different denomination on home soil. I realized we were so outnumbered in a place like Amsterdam that our mutual affinity for Christ was supreme instead of denominational distinctions.”

Baylor has made similar observations in Germany. “Among the people I know who are believers, there’s a sincerity of relationship that goes deeper,” he says. “Germans, in general, have less friends in number, but have deeper relationships. This carries into the church as well. They tend to take better care of one another and truly know and meet each other’s needs.”

Strickland believes racial and ethnic distinctions will matter less as our society grows increasingly secular. Diversity efforts now, he says, can prepare the church for later.

“I think that as culture shifts, believers will find more solidarity across racial, cultural, and economic differences than before because of our mutual affinity for Christ,” he says. “Jesus is not a cultural deity; He is for all people.”

And because Jesus is for all people, Strickland says, the church in the post-Christendom age is less likely to impose cultural norms on people of other nationalities and races, pressuring them to ignore their own culture to become Christians.

“This will lead to a better understanding of what the gospel actually is, because we won’t make people become like us to become a Christian,” he says. “We’ll create space for the gospel to make that person new within the context of their own culture.” This allows new Christians to better convey the gospel to others in their own cultural contexts.

Living in a post-Christendom age will also force the church to be more clear on what the gospel actually is, Strickland says.

“When we live in community with those who are different from us, we show the world around us that we are a precursor of the kingdom to come, as John describes in Revelation 7,” says Strickland. “Being sanctified in a diverse group helps to clarify the gospel.

“When we are in a homogeneous church context, we have the tendency to see—and convey—the gospel as Christ plus something else, like cultural trappings. But as we interact, serve, and worship with people from different cultural or ethnic backgrounds who love Jesus, this should prompt us to cross-examine the cultural trappings we impose on the gospel.”

Thoughtfully and actively examining these cultural impositions within the church will lead to a more clear expression of the gospel outside the church, says Strickland.

“This helps us clarify what the gospel is, and allows the culture around us to see a better demonstration of the gospel in a diverse community,” he says. “It also allows us to have a more articulate and sharp understanding so we can communicate without cultural spin or bias.”

For Baylor, it’s a good thing for the church to be on the margins because the assumptions are gone.

“Each person in the church is forced to think, make decisions, and take actions for the sake of the gospel that feel new and different,” says Baylor. “There are fresh implications in the post-Christendom age for the old and trustworthy Word of God.”

And this, he says, is good news for the church—and the world. 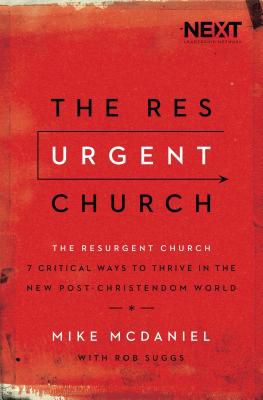 The Resurgent Church: 7 Critical Ways to Thrive in the New Post-Christendom World