When children raised in the church become adults, they have to make their own decisions about attendance and involvement.

Gallup found 35 percent of Americans attended a place of worship growing up and now no longer go. The research firm asked these people why they’re no longer involved.

Here’s what they said and how the church can address each group.

I prefer to worship on my own.

Two-thirds of the dechurched (65 percent) say they feel they can connect to God just as well or even better by themselves than with a group.

Just under half (44 percent) said this was a major factor in their lack of church attendance.

Response: Remind (or teach) them about the biblical importance of gathering with other believers, the need for accountability, and the joy that comes from worshipping together as a church family.

Similar numbers (65 percent) claimed their absence from church is due to not considering themselves religious.

While this was the third most cited “major factor” (33 percent), more gave this as a “minor factor” (32 percent) than any other reason.

Response: Find out what they mean by “religious.” It could be the things they dislike are things Jesus criticized. They may also be lost and need to hear the gospel.

This has become a popular reason for skipping church (61 percent), especially as younger Americans mistrust virtually all institutions.

More than a third (36 percent) say this is a major factor in their lack of attendance.

Response: As with those who say they’re not very religious, church leaders need to listen to people who give this reason to determine where they actually are spiritually.

Once you discover their objections toward “organized religion,” you can better know the best way to respond.

I don’t have the time.

In our frenzied, harried world, many claim they aren’t at church because they don’t have enough time (47 percent).

Only 19 percent say this is a major factor, but 28 percent list it as a minor factor.

Response: If people desire to attend church but say they cannot find the time, work with them.

Perhaps their work schedule has kept them away for significant stretches. Find ways to get them involved.

If it is a matter of priorities and not actually time, help them understand the reasons Jesus founded the church and wants them to be a part of it.

Almost half of the dechurched (46 percent) say this is part of what has kept them away from church.

Less than a quarter (22 percent) say this is a major factor in their not attending.

Response: Hopefully, these individuals just need to be invited to and involved in a healthy, biblical, local church.

Help them understand that no church will ever be perfect, but God has designed them to best function within a church body.

For many dechurched Americans (45 percent), the issue of money is a factor in not attending church.

Almost 3 in 10 (29 percent) say it is a minor factor in their lack of attendance.

Response: Maybe they have experienced unhealthy teaching obsessed with money. They need reassurance that church is not strictly about giving.

Others need to realize that the Bible has 2,000 verses on stewardship and money. Christianity is not solely about finances, but Christianity absolutely should influence your finances.

I’m not sure what religion is right for me.

Four in 10 (40 percent) of those who no longer attend church say they aren’t sure which church they should attend because they don’t know which religion is “right.”

Response: If they are deciding between the Baptist and the Presbyterian church down the street, that’s very different from not being sure whether Jesus or Buddha is right.

Ask questions to see where these people are spiritually and then point them to Christ.

I don’t feel welcome when I attend.

A third of the dechurched (34 percent) say they have felt unwelcomed when they’ve been at church.

Only 9 percent say it’s a major factor, but a quarter of the dechurched say it is an issue they face.

Response: If there has been genuine hurt from a previous church, don’t dismiss that. Acknowledge that churches can sometimes feel cold.

As you speak with them, your goal should be to reassure them they will be welcomed and loved at your church. Make that a priority in your congregation.

Poor health or other problems prevent me from going.

For 3 in 10 dechurched Americans (29 percent), they aren’t there each week because their health or other issues keep them away.

Response: If their health legitimately makes it impossible for them to attend services, work to get them involved as much as possible.

Visit and pray with them. Provide a way for them to listen to the services. Let them know they are still a part of the church body even though their physical body won’t allow them to be present. 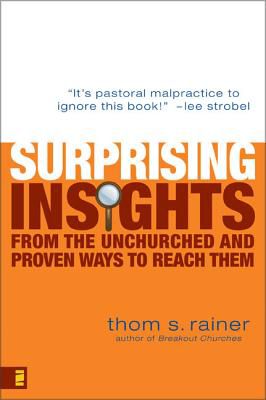 Surprising Insights From the Unchurched and Proven Ways to Reach Them

Previous Post: « Four Benefits of Partnering with Other Local Churches
Next Post: 4 Phrases for Preachers to Avoid »