The momentum shift. In my 21 years of leading the same church, I’ve experienced it more times than I’d like to admit.

Attendance was climbing. Salvations and baptisms were happening. People were growing in their faith and engaging in the mission. First-time guests were rolling in. Celebration and worship were spontaneous and abundant.

All of this, not only in the spring and fall seasons of the year, but through the summer and winter months, too!

But, then one day I noticed a different feeling in the air. I could tell momentum was slowing or had disappeared. The excitement was gone.

A few weeks went by without a salvation or baptism. A key family or two, even close friends, suddenly left the church without explaining the reason. They didn’t even say goodbye! Others complained or murmured about things that wouldn’t have mattered to them a few months earlier.

During such times, leaders often wonder what happened and why it happened. Most importantly, we wonder how can we “get things moving” again? We are tempted to resign, believing God is finished with us at that church, but maybe He’s not.

Sometimes we need to look under the hood and see what happened to the power. Here are three steps that have proven helpful to me in regaining lost momentum.

Determine what caused the problem.

Such momentum shifts can happen for a variety of reasons including, but not limited to: sin, lack of clear vision, inadequate/inflexible structure to support growth, lack of space or resources, or lack of belief in the church’s leadership.

I listen to the complaints and murmurs of negative people—even those who leave our church. As painful and frustrating as it is to admit, there’s usually an element of truth in every complaint.

Lay people see the church through a different lens than pastors and staff. They also care just as deeply about the church’s success. Their input is invaluable.

Ask questions like: How can we be more effective at reaching the next generation with the gospel? What are some of the obstacles we face to accomplish our mission? What’s the one obstacle we must address in the next twelve months?

I recently did this with 10 percent of our regular attendees. I told them, “This is your legal opportunity to identify problems and complain to me!”

We had dinner together for thirty minutes, then forty-five minutes around tables responding to questions. Then fifteen minutes of each table leader sharing their answers with the other groups.

Address the issues, develop a plan, and report to the church.

Within two weeks, every participant received a copy of every table group’s discussion points. Our staff then spent many hours clarifying the church’s mission and core values.

I preached on them and mailed a brochure to the church that explained it all. (We just presented to the church a major campaign to raise funds to address another problem. It, too, was initiated by the brainstorm session.)

I have discovered that many problems are simple and can be addressed quickly. If someone says, “Those stage lights are shining in my eyes!” fix such a problem before the next Sunday! Small irritations can become big issues if they are ignored.

Some problems will take weeks or months to address. In those cases, inform the people of the plan. Other issues could require a major campaign, a new staff member, or a refining of your vision and core values.

There are numerous benefits from such a process. But one of the greatest is the personal involvement of key people working together to help the church solve problems, overcome obstacles, and plan for the future.

As a result, they are helping the pastor and staff pull the church toward the future, and new momentum in the right direction begins to build. That’s much better than pulling alone. 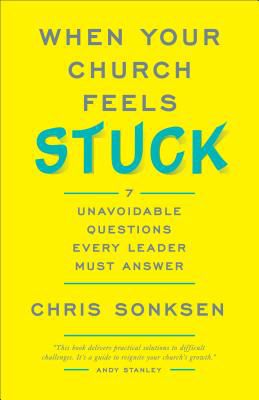 When Your Church Feels Stuck

7 Unavoidable Questions Every Leader Must Answer

Previous Post: « My Moral Integrity is Not For Sale
Next Post: Seven Days of Prayer for Your Pastor »