Each passing week, more churches in North America are waking up to a new world they were previously unaware of, and realizing the need for revitalization—the need to “breathe new life” into their church. Those who don’t wake up will eventually die, as we are seeing happen in increasing numbers.

The problem is, revitalization isn’t easy. Some churches just want to grow so they can return to a previous time they’ve romanticized as their “golden age.” Some churches feel obligated to sit tight until the most resistant members finally agree to a new path. Still other churches allow long-time members to sabotage the route to new life.

For the most part, these things happen, and are allowed to happen, because pastors do truly love their people and would prefer to see everyone move forward together. But refusing to make hard decisions and lead with clarity and strength can prevent the very revitalization your church needs.

What follows are five ways to prevent revitalization from happening in your church.

If you want to prevent revitalization, make sure key leaders remain clueless and divided when it comes to understanding the identity, purpose, vision, and direction of the church. Speak in spiritual euphemisms that seem holy, like “we just want to love Jesus and each other” or “we just want to follow the Bible.”

These sorts of nebulous statements—absent of any contextual application—are a way to sound biblical without actually being biblical. Furthermore, they’re the perfect way to stay adrift in a sea of irrelevance and never identify who God created your local church to be and what He wants her to do. The result, of course, is that the church will do nothing.

Investing More Time in Squeaky Wheels than in Leaders

You know the old saying; “The squeaky wheel gets the most grease.” In many local churches, those who “squeak” the loudest seem to get all the grease! And the grand mistake of church leaders is to give inordinate attention to the loudest and most needy people in the congregation, rather than invest in those God has gifted to lead the church.

This sets up an environment in which people learn that the most attention will always be paid to the loudest complainers. And this is precisely the kind of environment that will suck the life out of any real leader—or inadvertently push leaders right out the door.

Trying to Please Everybody

Almost without exception, in every declining church I’ve ever consulted with, decisions are never executed without the final question of “who will be upset by this?” Inevitably, good decisions are always sabotaged by someone suggesting that “doing this might really upset [fill in the name of your preferred group].”

In fact, the one way to ensure the first one above takes place is to assume this posture, because you can’t make a clear decision about anything if the number one concern is always about someone not being pleased. Guess what? There is no significant decision that will ever be made in a church that makes everybody happy!

Principled dissent is one thing. Saboteurs are an entirely different matter and in too many churches, they’re allowed to run free and do what they please no matter the negative impact they have on the rest of the body. They may come in the form of the lady who “holds back” her tithe because she doesn’t like a decision that was reached.

Strong leadership is needed in these situations. The gossip has to be called out and confronted. The self-proclaimed “devil’s advocate” needs to be told the church isn’t interested in Satan’s opinion. And the lady who steals from God needs to be reminded that she isn’t just “punishing the leadership;” she’s breaking her covenant promise to those in her church family and to her God.

Without strong leaders to confront such nonsense, troublemakers will be free to throw additional anchors over the side of their drifting ship to ensure it goes precisely nowhere.

Seeking to Live in the Past

Churches actually do this in a number of ways, the most obvious of which is to be highly suspicious of any sort of change. Music styles, architecture, structural paradigms, and cultural engagement in general are all changing concepts, and if the church does not reflect the culture it finds itself in all these areas, the result is far worse than simply an unclear gospel.

In the end, the church may lose the gospel altogether because they’ve identified its delivery with certain cultural accoutrements rather than a bloody cross and an empty tomb.

But there’s more than one way to live in the past. As with any social system, churches over time develop corporate patterns of behavior, and some of these patterns aren’t healthy. If they’re not repented of and clearly dealt with, they become the growing snowball that leads the church in one direction: downhill!

One thing is for sure though. If you want to ensure you don’t exist in the future, then just refuse to think about it.

Roughly 3,500 churches in North America close their doors for good each and every year. The vast majority of those I’ve seen close with my own eyes, did so by following the path I’ve outlined above. Many of them were not even aware they were dying, and when their trajectory was pointed out, they simply chose to deny it…and keep dying!

In that environment, most pastors have an unprecedented level of work to do, and the truly loving thing may not always feel loving. But the alternative is continued decline. Only the courageous can be used by God to revitalize a church. So let’s pray for courage. Then, let’s get to work! 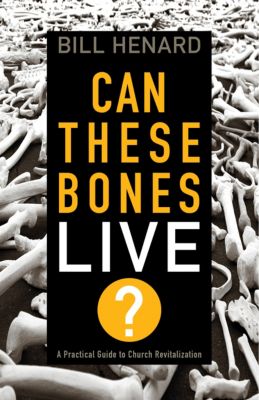 Can These Bones Live: A Practical Guide to Church Revitalization

Previous Post: « ‘This Is Our Time’ Gives the Case for Hope in the Church
Next Post: 10 Ways the Reformation Still Reverberates »