They spend between six and nine hours a day absorbing media, according to a survey from Common Sense Media. Among teens, 92 percent go online daily, Pew Research reports.

Their preferred mode of communication is digital, primarily through social media and texting. Drew Wike, director of student ministries at Greenwood Baptist Church in Florence, South Carolina, recently noticed some of his students sitting together in a restaurant. “They weren’t talking to each other,” he says. “They were texting each other.”

A smaller study of college students by professors at Drexel University found more than half (54 percent) reported sending a sext before they turned 18, often as a form of flirting.

4. They’re more accepting of sexual fluidity. Gen Z supports gay marriage and transgender rights. For them, such things are part of everyday life. It would be rare for a Z to not have a friend from the LGBT community.

Additionally, a 2016 survey of gender and sexuality by J. Walter Thompson Company, a New York-based marketing firm, found only 48 percent of those 13 to 20 years old described themselves as “completely heterosexual,” compared to 65 percent of those 21 to 34.

In his book, White describes the Gen Z attitude as “an increasing sexual fluidity that refuses either the homosexual or heterosexual label. The idea is that both labels are repressive.”

5. They’re racially diverse . . . and multiracial. Z’s have friends from a variety of ethnicities. About half of kids under 5 in the U.S. are ethnic minorities, according to the U.S. Census. Six of the 15 most common last names in the United States were of Hispanic origin in 2010, compared to none of the top 15 in 1990, the Census Bureau says. If your church’s congregation is not diverse, Z’s will wonder why.

And when Z’s get married, they’re more likely than their forebears to wed someone of another ethnic group. About 1 in 6 marriages today are of an interracial couple, according to Pew Research. In 1980, the rate was fewer than 1 in 10.

6. They’re pretty independent. Gen Xers, repeatedly warned about “helicopter parenting,” have reacted by giving their kids—Z’s—plenty of space. This hands-off parenting has yielded both pros and cons.

7. They’re aware of a troubled planet. Most Z’s have grown up since 9/11 and have only known a world where terrorist attacks are the norm. Additionally, they’ve lived through the Great Recession, and they’ve seen their parents, or many of their friends’ parents, struggle through job losses, foreclosures, and more.

“They’re a hopeful generation, but realistic,” says Josh Branum, family pastor at Faithbridge Church in Jacksonville, Florida. “They see the world for what it is. They’re not afraid, but they’re going into it with their eyes wide open.”

8. They’re justice-minded. Partly because of No. 7 above, Z’s want to make a difference in the world. Like millennials before them, they’re keenly aware of justice issues concerning poverty, human trafficking, refugees, racism, and more.

They want opportunities to have an impact, and they’re likely to become generous givers to charitable organizations as adults.

“They’re kids who volunteer, who have a heart for mission and justice, who sign up for things that previous generations didn’t,” says Burns. “It’s part of their DNA.”

9. They’re post-Christian. Almost a quarter (23 percent) of America’s adults—and a third of millennials—are “nones,” claiming no religious identity at all, according to Pew Research. Many Z’s are growing up in homes where there’s no religion whatsoever, and they may have no experience of religion.

“Gen Z is very secularized,” says Rick Eubanks, student minister at Oak Grove Baptist Church in Burleson, Texas. “Previous generations grew up with some Judeo-Christian values of the past, at least as a reference point. Today’s generation has little to no acquaintance with the gospel.

“So we have to start with square one: This is a Bible. It has 66 books. It has your story and God’s story. We have to speak in simple terms.”

10. They’re open to faith. Although only 4 in 10 attend religious services weekly, 78 percent of older Gen Z’s say they believe in God, according to a survey by Northeastern University. They view religious leaders as better role models than celebrities, professional athletes, or political leaders.

“They’re hungry for spiritual things,” says Eubanks. “They’re seeking something outside of themselves, which can be a good thing.”

There are more characteristics to Z’s, of course, but White sums it up like this:

First, they are lost. They are not simply living in and being shaped by a post-Christian cultural context. They do not even have a memory of the gospel. The degree of spiritual illiteracy is simply stunning. … [Second], they are leaderless. Little if any direction is coming from their families, and even less from their attempts to access guidance from the internet. … So how can they be reached? 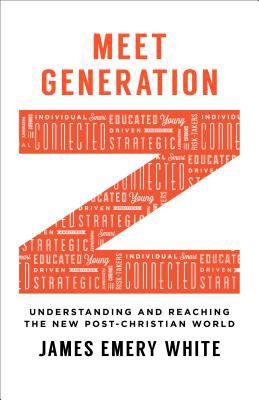