Few things capture the imaginations of church-going folks than sermons on the last days or end times.

This is not a new phenomenon. The first century believers in Thessalonica (modern day Thessaloniki, Greece) seemed to be enamored with Christ’s return, but Paul didn’t want them to misunderstand the truth about it:

We do not want you to be uninformed, brothers and sisters, concerning those who are asleep [have died], so that you will not grieve like the rest, who have no hope. For if we believe that Jesus died and rose again, in the same way, through Jesus, God will bring with him those who have fallen asleep. (1 Thessalonians 4:13-14)

Pastors and theologians have long held the importance of accurately dividing eschatological words of truth. Too often though, we see dull knives forced again and again onto the sacred text, resulting in tortured interpretations (the UN Secretary General as the Antichrist) or unbiblical expectations (77 Reasons Jesus Will Return in 1977).

In the 1970s and 80s, church auditoriums were swollen with people convinced 2018 would fall during the millennial reign of Christ. Jesus would long have returned by now. Instead, we have Millennials and Gen Zers with little-to-no connection to—or interest in—long expired dates on “end times” labels.

Eschatological preaching is needed. We do have a blessed hope. Christ promised to return. Part of our motivation for holiness is to be ready for his appearing. His re-appearance will usher in the cosmic renewal for which his followers have yearned for centuries, indeed all of creation is yearning.

But, let’s get it right.

When we preach from Daniel, Revelation, the Olivet Discourse, the “man of sin,” or other prophetic passages, here are a few pitfalls to avoid.

1. Making every news item a “sign of the times”

Seeking signs is nothing new. Signs were commonplace for God’s people in the Old Testament. After Jesus informed His disciples of Jerusalem’s impending destruction, they wanted to know:

Jesus then gave about half-of-a-chapter of signs and instructions. His followers have been looking for signs of His coming since that day. It’s practically become a spiritual gift.

When pastors or teachers try to convert news items into biblical signs, the results can be theologically catastrophic. Take the pastor I saw on a TV broadcast who said to his church—in utter seriousness—that Microsoft’s Windows operating system is the beast of Revelation.

Or a computer in Belgium called “the beast.” Or the Gulf War will lead to Armageddon.

Pastors, teachers, and theologians—historically—have not proven adept at reading the signs of the times. We’d be better off preaching on disciple-making than tying daily headlines to a biblical prophecy.

Henry Kissinger. Ronald Reagan. King George. The Pope (just pick one). Caesar. A random Jew from the tribe of Dan.

Each and every one of these, at some point in history, has been suspected (or accused) of being the Antichrist. Such speculation is distracting to the mission God has give us.

There’s no scripture that encourages guessing the identity of the Antichrist. We (not to mention our churches!) would be better off in leaving this secret thing to God.

When we don’t take into account the original audience of the text, we may find ourselves in fantasy land.

When Jesus and his disciples walked across the temple complex and Jesus said not one stone will be left on another, His disciples would not have interpreted a 2,000-year futuristic reference.

Indeed, it was mere decades (AD 70) before that prophecy was fulfilled. When Jesus said in Matthew 24:9, “Then they will hand you over..they will kill you…you will be hated,” Peter, James, and John would not have connected “you” to 21st century Christians; they would have looked at each other.

“Concerning that day and hour, no one knows…but only the Father” (Matthew 24:36)

Some American Christians seem enamored with how (or if) America fits into biblical prophecy. One preacher I heard likened an Old Testament “eagle’s wings” reference to the United States because our national bird is the bald eagle. That’s as shaky as maracas in a Salsa band.

Many American Christians already struggle with a view of history that is over-Western or overtly American, seemingly unaware God has used myriad nations throughout history to accomplish His will.

Scripturally speaking, America, ancient Rome, Botswana, China, Persia, Mongolia, and Montenegro are the same in God’s eyes: a drop in the bucket, dust on a scale, empty nothingness (Isaiah 40:15-17). He uses them as He wills, when He wills, if He wills.

When we assign to America a greater role than Scripture reveals, we may be leading hearers to an interpretive pit. Some things that “make for good preachin'” do not make for good Bible.

Jesus is coming again. He will return to the earth just as He was seen leaving it nearly 2,000 years ago. He will come in power. He will institute the fullness of His kingdom on earth as it is in heaven. Until then, He has given us a Great Commission.

The more the mission consumes us, the fewer pitfalls of eschatological speculation will deter us. May we live in faith what God has revealed, while leaving the secret things to Him. 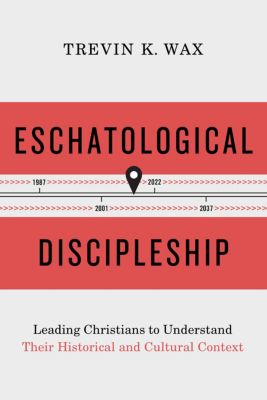