I invite you to read this opening to my journal dated October 1980.

I was 40 years old and Margaret was 38. We were in our 19th year of marriage, and pastoring the First Baptist Church of Columbus, Mississippi. Our children were 17, 14, and 11.

The first entry in the book is dated October 9. However, the paragraph above that reads:

The month of October got off to a poor start around the McKeever household. I announced to Margaret that until October 27th, there were no open days or nights. The month was filled with church meetings, committees, banquets, associational meetings, speaking engagements at three colleges, a weekend retreat in Alabama, and a few football games. She cried. Once again, I had let others plan my schedule in the sense that I’d failed to mark out days reserved for family time.

I ran across that book today, read that paragraph, and wept.

The irony of this is that a year or two earlier, we had come through months of marital counseling and felt that we finally had a healthy marriage. In fact, one Sunday night six months after this journal entry, Margaret and I would take the entire worship service to tell the congregation of our marital woes, of our attempts to make this relationship work, of our extraordinary efforts to get counseling, which involved driving 180 miles round trip twice monthly for two-hour sessions with a professional therapist, and of the Lord healing our marriage.

We were supposed to have a healthy marriage, and here I am putting everyone and every thing ahead of my own family.

What’s wrong with this picture?

That is my greatest regret from over half a century of ministry: I failed to take care of my family.

Now, I am not groveling in self-pity. I tell this in the hope that younger ministers will see themselves in this and not make the mistakes I did.

The tension between home and ministry was constant for us, starting early and never letting up.

As young marrieds, when we were living in the vacant parsonage of Central Baptist Church, Tarrant, Alabama, Margaret said, “You might as well move your bed to the church.” I was holding down a 40-hour a week job in a cast iron pipe plant nearby, and in the evenings and weekends serving Central as assistant pastor.

Margaret’s father had been a Greyhound bus driver almost all his adult life. His schedule varied from time to time, but when he was home, he was all there. There were no calls for him to drop everything and report to the station.

A minister’s life is all about interruptions.

Margaret used to complain that the moment I walked in the house the telephone started ringing.

I loved my family dearly and I think they knew it. What they could never understand was that the demands on me were never-ending and that I had a hard time telling people “no.”

In fact, to this day, I admire people who can say “no.” Over the years, from time to time I would ask people to serve on this committee or that task force, to chair a project or to lead this drive. While I appreciated those who responded eagerly and positively, people who turned me down because “my ministry is in this other direction” or “I’ve promised my wife we would take that trip” earned my total respect. I wished I had their strength of focus.

No one is saying a pastor should put his family before the Lord.

But a pastor doesn’t have to attend every committee meeting.

A pastor doesn’t have to accept all those invitations to speak elsewhere.

A wise minister learns to say, “No.” And if he finds that impossible, he can take a smaller step and practice saying, “Can I pray about that, and get back to you?” Stalling for time—even an hour—allows him to look at his schedule more objectively.

Somewhere I read of David Jeremiah’s angering a church member who had dropped into the office demanding an hour of his time just as the pastor was leaving to make his son’s baseball game. The member was irate that the pastor would put his son’s game ahead of his needs. Jeremiah assured the man that there were other ministers in the building to assist him, and with that, he walked out the door.

The minister who learns to say “no” in order to protect his time with the family will occasionally anger a self-centered, demanding church member. But it’s a small price to pay, and in the long run, works out best both for the family and the immature member.

Only a strong pastor can do this. I sure wish I’d been one.

This article was first published at McKeever’s personal blog and is reprinted here with permission.

Churches can help pastors better support their family, by loving and supporting them as well. In another Facts & Trends article, a pastor’s wife shares 13 ways churches can honor a pastor through loving their family.

JOE MCKEEVER is a writer and retired pastor after more than 50 years in the ministry. Read more of his work at JoeMcKeever.com. 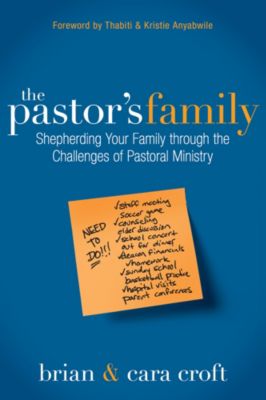